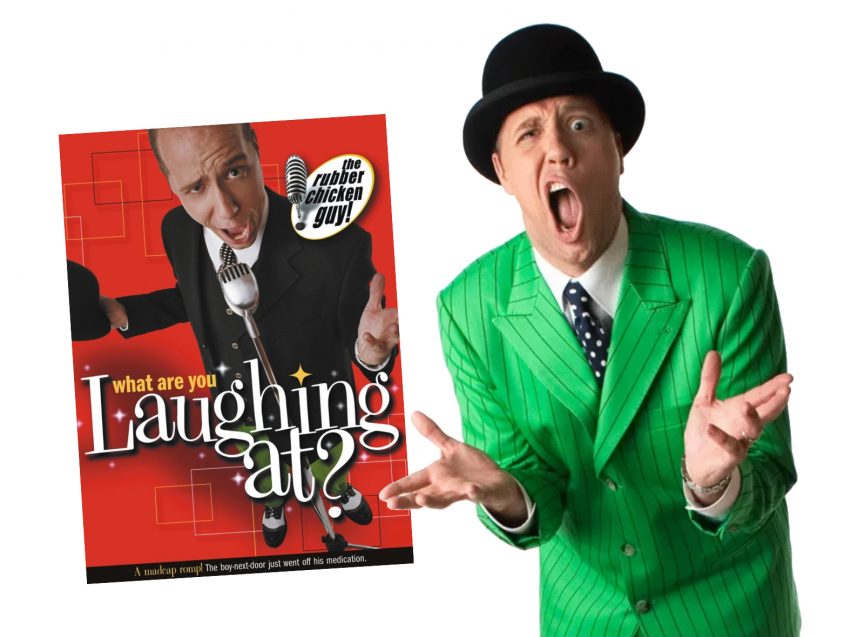 I show you this against all better judgement. 😂 The image above is from a previous life as a comedian. My stage name was The Rubber Chicken Guy. You can imagine how proud my mother was. The graphic on the left is the cover of my DVD.

I feel like I know you. Maybe not everyone who reads my blog or emails, but so many of you have replied to one of my letters, commented here on my blog, or introduced yourself to me in person that I feel I’ve somehow stumbled into a really wonderful friendship I didn’t know I needed. Sometimes I wonder if the thing I want most professionally is just to get us all into the same room, have a drink, and tell some stories.

If we were to do that, these are some of the things that might just slip out—the chances of which increase dramatically as the evening (and the wine) wears on. Those things would either make you wonder if choosing to learn anything from me was a good idea or confirm that I’m exactly your kind of people.

I should warn you; there’s no point to this. It’s not leading to a metaphor about photography, and there’s probably no value in discovering, for example, that my childhood nickname was “Monkey Doodle.”

I just thought, given the amount of time we spend together, that there are a few things you might not know about me and that perhaps there might be something I don’t know about you.

I’m a voracious reader; I usually have two or three books on the go. Currently: The Tree by John Fowles, Black Box Thinking by Matthew Sayed, and Zen Mind, Beginner’s Mind by Shunryu Suzuki. My last novel was The Vanishing Half by Britt Bennett. If I had to pick between the pictures and the thousand words, I think I’d choose the words.

I have Type 1 diabetes, which should surprise no one, given the amount of Froot Loops I ate as a teenager. I was diagnosed when I was 20. That’s about 55,000 jabs for a guy who hates needles. While navigating my diagnosis and what it might mean for me, I remember my mother telling me I could control my diabetes or it could control me. I chose the former, and it hasn’t once stopped me from doing what I do. Take that, pancreas.

One of my first jobs was as a clown at a shopping mall handing out balloons. I took it because I love kids. Kids, it turns out, do not love clowns. This traumatized me forever. I should point out that the job I had accepted was to “hand out balloons.” The clown outfit was a total surprise, as was the huge tank of helium. I very much enjoyed the latter more than the former.

I spent my first five years in Lahr, Germany, as an army brat. My best German word is Volkswagen, and I’m pretty sure I don’t pronounce it correctly.

My first cat was toilet trained. As in, she used the actual toilet. Never flushed, though. She would also sit on top of the fridge and take a swat at anyone who walked by, as long as they were bald. Hairy people got a pass.

I can ride a six-foot unicycle and juggle flaming torches, and steal your watch, though not usually at the same time. During one of my most memorable shows for a crowd of 100 police officers, I stole the watch of the police chief. Twice.

I own three nice guitars and play like I should probably own just one crappy one. I do a very enthusiastic version of John Denver’s “Country Roads.” Not a good version, but I sing it with feeling.

My beautiful wife, Cynthia, was a student on one of my workshops. We met in Italy and one week later I fell off the wall in Pisa. But we’ve been together since the day we locked eyes in the little breakfast room in the hotel in Genoa.

I love spicy food. When I was little, my father used Tabasco on my fingernails to stop me from chewing them. It stopped me from picking my nose, too. Ouch! But now I love it (the spicy food, not the nose-picking, necessarily).

When I was seven years old, I started my first business: a private detective agency, to help reunite people with their lost things. I gave out hand-drawn flyers made by a neighbour girl I recruited as my secretary. My mother shut it down after the phone calls started coming in. The neighbour girl never got paid, and I still feel bad about that.

I competed in judo. Twice. Each fight lasted for 10 seconds, if you count the time I spent lying on the mat afterward. When I say, “I’ve got your back, man,” you just might want to have a Plan B.

Speaking of competitions, I once won second place in a cartoon contest—and I was the only one who entered. You can hear more about that here. This explains my suspicion of anything competitive.

My final photography project in Grade 12 was really good, if I do say so myself. The teacher claims it “went missing,” but for many years, I suspected it was just so good he hung onto it. In hindsight, I suspect I was wrong about that, but I sure wish I could go back in time and thank Mr. Brian Harris for lighting the spark in me. I don’t remember a single specific lesson, but he instilled something better in me: a love of craft and imagery. He lit a fire.

If you’re really new around here or just can’t keep track of it all, here are a few ways to get more of what I create for you that you might not know about.

I have a podcast for people who don’t listen to podcasts called A Beautiful Anarchy. Dedicated to the joys and struggles of the creative life, I think it’s one of the best things I’ve made for you. You can listen here. More of a reader? You can get my creativity trilogy here. (Also, if you haven’t seen it, the Vision Is Better Show on YouTube ran for about 80 episodes, and you can catch them here.)

If you’re not already getting The Contact Sheet, you can do that here, and if you would like to get monthly articles about creativity and quick reminders when I post new episodes of the Beautiful Anarchy podcast, you can subscribe to On The Make by going here. Just scroll to the bottom of that page and tell me where to send it. I’ll also send you a copy of Escape Your Creative Rut: 5 Ways to Find Your Groove Again.

And if you’re one of those gluttons for punishment who insist on making a living from your creativity, then you’re my kind of person. I’d love to send you The Audience Academy, my bi-weekly email to creators, makers, and artists who want to build an audience that loves what you make and wants more of it. You can subscribe to that here, and when you do, I’ll also send you a copy of Encore! 3 Ways to Stop Marketing and Start Building an Audience That Wants More.

Looping back around (aw, crap, I said I wasn’t going to do this), after photographing for 35 years, I am still so in love with the still image. And since I’m not making many these days, I am enjoying the images of others. One of my readers, Andy Duncan, has a wonderful project called 52 Photographers, and I’ve found some lovely work there from photographers who aren’t the usual suspects, and I thought you might like to check it out here.

On the subject of photographers, here’s another that I recently discovered (and I wish I could remember who introduced him to me so I could thank you properly). Check out the work of Polish photographer Maciej Dakowicz here. I love his eye for juxtaposition; it’s wonderful stuff.

It’s your turn. Some of the people who read these articles and emails have been doing so for over 10 years. Some are brand new to me (and me to you), and I’d love to know a little more about you. Feel like introducing yourself? I’d love to meet you, but if we’re going to do this, let’s do it right. The comments are open for conversation, a glass of virtual wine, and anything you feel I should know about you if we’re going to keep meeting like this. Spill the beans, friend.