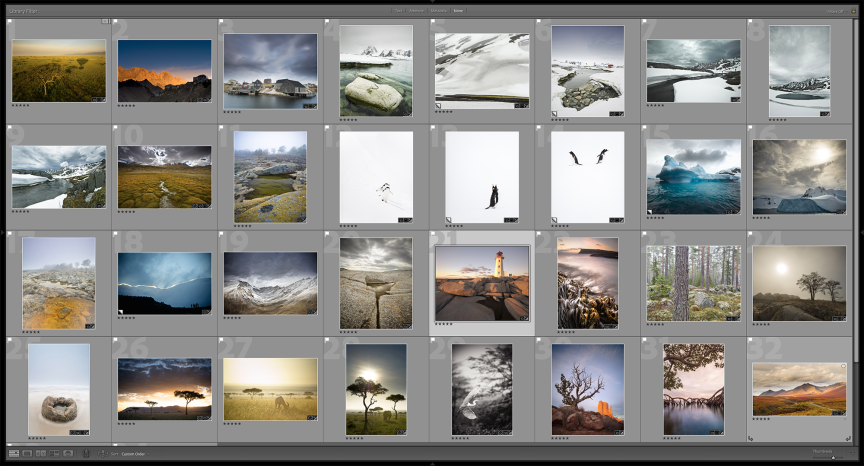 Take a few minutes to watch the video above or, if you’re more of a written word person, keep reading.

When I came home from Kenya last year, I had a hard drive filled to busting with 30,000 images. I’d been photographing for 30 days, so that’s a daily average of 1,000 photographs which, it turns out, is really easy to do when your camera can not only do 30 frames per second but do so completely silently. Things kind of got away from me a couple of times! Combine that with my joy at just being there and making photographs, and it’s no surprise that I couldn’t have squeezed so much as a tiny JPEG file onto my hard drive when I was done.

I also came home with my edits mostly done. And my development work. And the monograph I sent out to the photographers in my community a week after I got home. By contrast, I have a friend who shot a safari five years ago who still hasn’t done a complete edit of his work. Five years later, his images are still sitting there begging to be seen, to be printed, or put into some form of creative output that can be shared with the world.

Why? He gets overwhelmed by it all. And he doesn’t have a system. He looks at all those images and gets paralyzed. So while I’m excitedly making prints and sequencing monographs or web galleries, he and so many like him are doing…nothing.

It’s not a criticism. I know so many photographers who walk in the door after making a bunch of photographs and say, “Well, that was fun. Now what?” And because the edit can be so intimidating, it gets reduced to an ad hoc effort at picking a few good shots,  pushing some sliders around in Lightroom, and throwing them onto Instagram before moving on to the next thing. The reason I don’t criticize this approach (it’s really more a lack of an approach, isn’t it?) is because that’s how I used to do it, too.

Before I started doing assignment work, my editing was scattershot and intimidating. I probably still have folders of images from over 15 years ago that haven’t really had a fair shake. But client work forced me to get intentional about how I imported and organized my images, to be clear about my criteria for selecting the best of that work, and to be a little more systematic about the output.

That client work made a huge difference. Not just in my client work but also my personal work. Suddenly I was anticipating the output, and because I knew I’d be making something (a book or a monograph, for example), I started shooting more intentionally with that in mind. And I started thinking about editing much more creatively and purposefully.

By “editing,” I mean the work of selecting the best images from among the dross—or what I like to call the sketch images. It’s the work a photo editor would do if you or I had one, and it falls to us because, well, we probably don’t. In fact, I started looking at everything that needed to be done after the camera work was over as a more exciting creative opportunity and a chance to do something with my photographs.

This article is the first in a series in which I want to explore what we do after the camera goes back in the bag and the ways in which that can make us even stronger, more intentional, and more creative photographers when we take it out again.

The first question I want to ask (on your behalf) is this:

“How can I make the edit easier, less intimidating, or overwhelming?”

I’ve got three initial ideas that I think can be really helpful, and they’re a big part of how I was able to come home with 30,000 images already mostly edited and the best of that work ready for output rather than dreading the pile of images I had yet to go through.

Just Look for the Best of the Best

We all photograph for different reasons and we all do things differently, but I think edits (especially the first edits done relatively soon after shooting) should be selections, not ratings. My own edit process goes much more quickly because I’m not looking for every single image that meets some basic minimal technical standard. I’m looking for the ones that make me lean in. The ones that make my heart sing. The ones that grab me and won’t let me not select them.

You might have a great reason for rating images, but I think trying to decide whether an image deserves 2, 3, or 4 stars slows the process. Because I’m looking for a few frames that are a decisive “Yes!”, I’ve found rating them makes me look for the wrong thing.

Consider being more binary. Yes! Or no. After all, how many images do you really need? Wouldn’t it be easier just to look for the best 12 or 24? It is for me.

Break it down. I do daily field edits and come home with main selections already made. This makes it manageable, but it’s more than that. Doing daily edits means things don’t get away from you. It gives you a chance to spot things that aren’t working. For example, you’re more likely to notice that you accidentally shot small JPGs all day when you thought you had been shooting RAW. Or you discover your lens isn’t focusing quite right. Or your sensor needs cleaning. It’s better to discover that after one day of shooting and be able to fix it, rather than much later on when it’s just too late.

More than that, doing smaller daily edits harnesses the energy and excitement to comb through a manageable pile of images and give them your full attention, rather than later when the pile is much larger and your energy is diminished.Sure, I’ll do another pass later—usually a couple more passes—but the smaller edits make the best of my limited resources of time and attention (which wane after a few thousand images, let me tell you!).

Consider (or Choose) Your Output

My clients taught me to do this, but the biggest rewards have come in my personal work. I come home and almost always as a matter of creative habit, put my work into monographs and collections of prints. I now think in terms of bodies of work and collections and sequences, and that has also had huge payoffs in my creativity and the ongoing question of what I can do with my images rather than letting them sit on my hard drives hoping to see the light of day.

Those three ideas alone have made my editing simpler: looking only for the best and not worrying about the others, doing smaller bite-sized edit sessions, and consider your output, which allows you to think not only about which images are best, but best for what.

I’d love to hear from you about this. Where do you find your greatest challenges when it comes to choosing your best work and doing something with them, staying organized, and doing all the work that happens beyond the shutter? If you feel like talking about it, drop me a note in the comments below.

PS – I’m working in Kenya for the month and having a devil of a time with getting online. I’ll do my level best to reply to everything but please forgive me if I don’t get to everyone’s comments or emails. Doing my best, I promise!