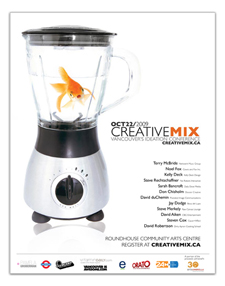 On Thursday the 22nd I attended a conference called Creative Mix Vancouver. It was the brainchild of my manager, Corwin Hiebert, and it was incredibly inspiring to me to see a room packed with creatives from an incredible cross-section of disciplines. We had writers and publishers, ad executives and musicians, video-game creators, film-makers, photographers, and a chef. Not to mention the fashion world, illustrators, and architects. And all of them talking about their process. It was incredible.

I tell you that for two reasons. One, to explain my unexpected absence here on Friday. I didn’t plan for that to happen, I just plain forgot. I get distracted easily and I think I thought I had something in the can and ready to go for Friday and I didn’t. Oops. Two, one of the recurrent themes at the conference was collaboration, and the notion of letting ideas into the world and into the hands and minds of other people to evolve and grow. You’ll see where I’m heading with that at the end of this post.

This is going to be a longer post. I want to update you on where things are at and where they’re going on the Pixelated Image Blog and I want to invite your participation in being part of its growth, because you’re a part of this community, even if you’re a lurker and never comment, and it’s fitting that you have a chance to be part of the growth of this thing.

So. As far as I can see from here, and it’s not far or clearly, I assure you, here’s where I think I’m heading with all this over the coming year. 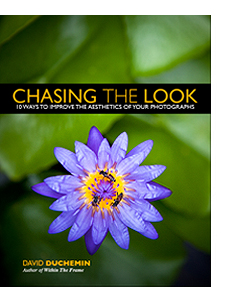 As many of you have noticed, I’ve been busy. I have two passions that I bring to this blog; creating photographs and teaching others about the same. In an effort to learn InDesign I created my first eBook, TEN, two months ago and the response has blown me away. I decided to push my luck with another, TEN MORE, and it too has had an incredible reception. DRAWING THE EYE was released last week and I accidentally began working on a fourth and am almost finished it. I accidentally discovered that I love creating these. If no one ever bought these things I’d probably keep creating them because I enjoy the process and the creation of something new. The incredible response was never anticipated. So I have plans to do more. The comments I keep getting tell me the content is valuable. So while I’m making no promises, I’ve talked to a couple other photographers I love and respect, and we’ve got at least three potential collaborations in the pot right now.  I’m hoping to release those after the release of my fourth eBook, CHASING  THE LOOK, 10 Ways To Improve The Aesthetics of Your Photographs (left). I’ll give you some time to digest DRAWING THE EYE before I release this next one, then after CHASING THE LOOK I’m going to introduce you to Kevin Clark and Dave Delnea and do some collaborations with them. If the eBooks were songs, these would be duets. But I’ll space them out, I promise. 🙂 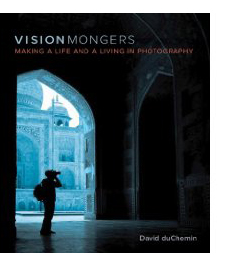 In the midst of all that my second print book will come out. VISIONMONGERS, Making a Life and Living in Photography (left) is at the printers now and should be out November 16, which means that’s when it ships from the publisher to Amazon. If you pre-ordered with Peachpit, you’re likely to get yours about the same time I see mine for the first time. If you pre-ordered with Amazon.com, you’ll see yours shortly after that. If you pre-ordered with Amazon.ca, or God-forbid Amazon.co.uk, well, you might as well find a comfy chair and put the kettle on, it’ll be a longer wait for you. But when VisionMongers comes out you’ll see some posts here about the business end of things. I won’t stop writing about creating photographs, but I’ll also be talking about the issues raised in the book, doing some related give-aways, and in general picking up a thread that I’ve discussed here in the past but neglected while I was writing this book so I wouldn’t get confused.

And speaking of Giveaways, I’ve got a few more in the pipe that I’m excited about. I do these because I love to give stuff away and because I like my readers. When I get a sponsor I always make a deal with them – if I get something, so does at least one of my readers. Be on the look out for some goodies from OnOne software soon. I just talked them into forking over some stuff, so I’ll announce that after I draw for the Wacom Intuos4 tablet. I’ve also got signed copies of VisionMongers, and signed copies of Steven Pressfield’s War of Art. In fact I think I’ll give away a 3-set that includes a signed copy of War of Art, a signed copy of VisionMongers, and a copy of Within The Frame signed by me, Joe McNally who wrote the foreword and Vincent Versace who wrote the afterword. Call me crazy. I’ll announce those later but I wanted you to know what’s coming down the pipe.

And that brings me to the last thing. The books, electronic or paper, are not replacing the content here on the blog. This is where I connect with you, share my latest thoughts and (mis)adventures, and enjoy the pleasure of a growing community- I wouldn’t trade it for anything. So this is where I open it to you. This is an invitation for you to collaborate with me and throw your best ideas at me and see what sticks. If you’ve got an idea about something you’d like me to write about or teach, an issue you’d like me to address, or a question you’ve been dying to ask – now’s a chance to get it out and make it known. If you’ve got an idea about the design of the blog, a feature you don’t see, or a photographer you’d love to see me interview, let me know. Basically I’m telling you I want you to have a hand in the direction of this blog. I’m not guaranteeing I’ll do all – or any – of what gets suggested, but the more voices I hear the more able I am to know why you come here, what you get out of it, and what you’d like to see more of.

And to encourage the participation of less vocal members of this community, I’m going to put a prize into the mix. I don’t even know what it is, but if I fail to come up with something more clever I’ll just sign a couple books and look through my closet and send something – anything – to keep you happy. I’ll pick one contributor to this conversation, might be a random choice, might be someone with a great idea, I’m not sure. But you deserve a shot at something for reading this far and contributing.

Thanks again. To all of you, from the more vocal people whom I now call my friends, to the lurkers who just come and listen quietly in the corners. It’s truly rare for an internet community – either a blog or a forum – to be so consistently blessed with such kind, fun, people, and somehow avoid the crazies. Thanks for being a part of all this. And for reading this whole post. Lord, this was long.