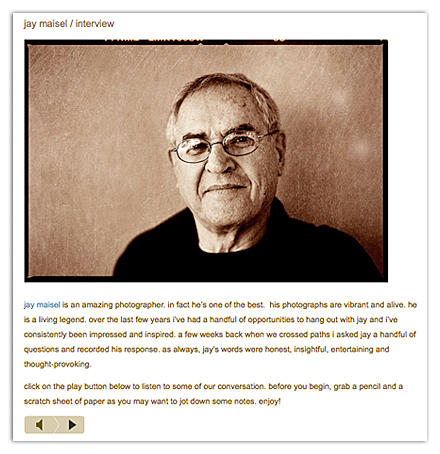 There’s this great story about William Shatner ( aka Capt Kirk aka the Priceline.com guy) at a Star Trek convention. Clearly a bit put off by his fans he yelled at them to “Get a life!” Ok, not much of a story, more like a cautionary tale about biting the hand that feeds you, but I’ve always liked it. And it relates. Sort of. (Updated: Turns out the Get a Life thing was an SNL skit. But it was still Shatner. I stand corrected. Thanks. That’s what I get for blindly telling apocryphal stories without consulting the Google. 🙂 )

I just finished listening to a short audio interview of Jay Maisel by Chris Orwig and in it Maisel says a couple of things that, if you read between the lines, are his way of imploring us to get a life. Want to be a better photographer, he says, be a more interesting person. Want better photographs, don’t study photography, study life, that’s what he’s saying.If photography is an act of expression, and for most of us it is, there must be something there to express. Want more to say? More texture? More depth? You need to be a photographer who first has more depth, more texture.

Maisel gets a bad rap as being a real hard-ass, and he might be, but while I suspect it’s only one of those gruff NYC exteriors, I think it’s still important to listen to him. Each time I’ve heard him speak he says something that makes me think, re-calibrates me. In fact the more I listen to photographers like Jay, people who’ve made a life and a living through their lens for a long time, the more I wonder why they truly don’t seem to give a damn about all the trappings that the pixel peepers are bent out of shape about.Why? They’ve found something they care about more – life. Now, whose photographs do you want to look at? Someone who cares deeply about cameras and inverse square law, or someone who cares deeply about life?

I’ll be out for the next few days. I’m taking some time to get away and do my annual thinking and planning with fewer distractions than home. And then I’m spending 24 hours with my friend and manager, Corwin, for our twice-annual Think & Drink – a planning session that is un-necessarily helped by some good single malt scotch and coffee. Not together. Coffee in the morning. Scotch in the evening. So, that might mean a couple shorter posts this week. But I wanted to leave you with two things.

1. My friend Mitchell Kanaskevich has two ebooks out, I’ve directed you to them before. He’s offering a Two for One sale and if you don’t have these two pdf books, they are well worth looking at. You can find him and his books HERE. I’m a fan of Mitchell’s work, take some time to look at it while you’re there.

2. This November is packed for me; too much going on. I had planned to release the next ebook closer to the end of the month. It’s done and ready to go, but I got a few comments last time to the tune of, “For the love of Galen Rowell, slow down, duChemin!” So I know I promised to space these things out but there’s just too much going on behind the scenes for me to space everything out perfectly and if I leave it too close to Christmas y’all are going to have to decide between buying a $5 ebook and that knick-knack for that co-worker you don’t really like and I don’t want to put you in that awkward position. So, Chasing The Look is coming out this week.  And by “this week,” I mean tomorrow. And the official release of VisionMongers is a week from this morning. Like I said, busy. But ya gotta make hay while the sun shines and that means I get these things out while I’m not on assignment or working on my next print book.

Thanks a bunch for your kind anniversary wishes. Sharon and I had a great time getting away from it all. We were socked in by rain which was just perfect for spending a weekend in a cottage nestled into the BC coastal forest with a fireplace, endless pots of tea, and the one I love. Thanks again for the kindness.