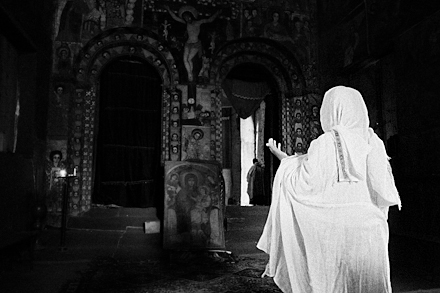 I wrote this earlier this year to stave off the insanity of jet-lag one night while on a particularly challenging assignment in Ethiopia. It’s a little stream-of-consciousness and I offer it for what it is. In my defence, my mind was a little foggy from the jet-lag. If you’re looking for wisdom, move along – nothing to see here. The photograph above was shot in Northern Ethiopia – Gonder, to be precise, back in 2006.

I’m jet-lagged. It’s 9:30 in the evening. I’ve just accidentally slept through the afternoon and woken up to the realization that there’s no chance I’ll get another wink of sleep between now and my 5am wake up call. I’m in a hotel room that redefines mediocre, in a hotel at which I stayed 2 years ago and of which I have unkind memories. I was here with a friend visiting an orphanage and had developed a sore in my mouth which made eating so painful I wanted to cry. Mike refused to challenge the roaches on their claim to the shower. Good times, as they say.

These are the nights I don’t tell people about when they tell me I’ve got the best job in the world. These nights of restlessness in crappy-ass hotels, listening to disco hammering its way in from the streets, longing for home, stressing out about the coming days on an assignment that seems doomed from the get-go. Nights spent trying to stay positive, to not wonder about the parasitic possibilities latent in the mosquito bites the net was meant to prevent. Nights hoping the bug-bite on your eyelid doesn’t swell your eye completely, forcing you to shoot with the other one, the one that doesn’t “see” any better than a teenaged photographer with his first roll of film and an AE-1.

I’ve plugged in my iPod, played Toto’s requisite Africa over and over again, before moving on to Paul Simon’s African-inspired Graceland album. I’ll settle, slow down, move on to Van Morrison, and find my groove, work on the book I’ve been chipping away at, more to avoid getting morose and thinking about how badly I want to sleep this night away, get in the truck and keep moving, get to the location and fix this mess.

I’m meant to be here for 5 days of shooting and the local NGO has policies about transportation that mean I won’t be on location until late Monday afternoon, will have two days to shoot, and then turn around and repeat the 2-day drive back to Addis Ababa and the plane that could have been booked 2 days further out if only we had been told of this policy. It’s no big deal, they pay me, I do what I can, I go home. But the thing is, I care deeply about this work and want to see it go well. It’s a new client and I want to knock this one out of the ballpark. Now the game’s been cut dramatically short and my bat’s been cut in two.

The reason I keep doing this, time after time, is in part because I love the adventure. I keep saying that as long as I make it out alive I come back with a good story and in the circles I move a good story is like currency, any evening spent together with other travelling photographer inevitably ends with an escalating vortex of stories that begin with “when I was in Serbia,” and “How many times have you had malaria?” before finishing with the usual bullshit about how we shot an assignment through the haze of a fever and a camera that was permanently stuck on 1/250. As evenings go, you could do far far worse, but you only get to play if you have the stories. So bring it on, you say, though dreading the thought that the fates might just take you at your word.

I also do it because I love the kids. The humanitarian organizations for whom I work specialise in development that focuses on children and my time with the kids and families in some of the more remote places on the planet, is deeply gratifying. Where it not for the kids, were I coming down only to shoot the installation of a new water pump, I’d give it up entirely, try my hand at writing perhaps. The kids keep me coming back. This is why I shoot. I tell others to shoot their passion, and this is why – it sustains you, makes your work better, and gives the challenge a payoff that money alone could never do.

It’s past midnight now; four and a half hours to kill until the alarm goes off. Nights like this it’s hard not to think about home and the last time I saw my wife and the sushi we had the night before I left. Hard not to think about my morning ritual of a coffee and bagel by the ocean before going back to work, or the days when there’s writing to be done and I walk to the water taxi and take the brief ride across False Creek,  under the steelwork of the Burrard Bridge, before stepping off at Granville Island, and walking to my favourite coffee joint. Hard? Hell, it’s impossible not to think about those things.

But in the morning, when the sun comes up and I step out into the dawn and the dust & diesel smell of Ethiopia, and into the Land Cruiser to continue our two-day trek through the breathtaking Bale Mountains before making the descent into the remote lowlands on the Kenyan border, all these thoughts get washed away by the thrill of movement, of new sights and smell and the epic feeling of being a million miles from email and the pseudo-obligations of the busy busy busy routine.

Thank God, on these nights, for Van Morrison. I’ve been thinking about listening to every song on my ipod and counting how many times he says “Jelly Roll”. Despite it all I’d rather, right now, truly be nowhere else. And in 4 days, on the other end of this trip, when I wrestle with jet-lag at this same hotel on the way back to Addis, I’ll be wide awake, but thinking about the Ethiopians I met, the stories I’ve heard & been a part of, and the hope I’ve witnessed. I’ll be looking at images that didn’t exist before this adventure began, and the sleepless nights in a $9/night hotel with the cess-pool bathroom won’t seem so bad. Man I love this job…