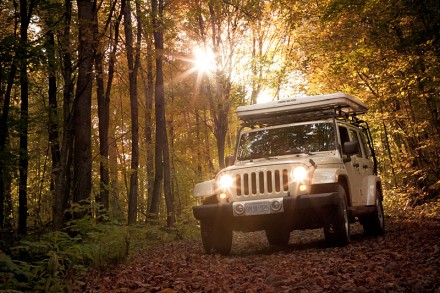 Almost a year ago I bought a 1993 Land Rover Defender named Jessie. To say we had a rocky start is an understatement. There were days I was torn between loving that Defender and wanting to drive her into the ocean. Things took a while to smooth out for Jessie and I, but I bribed her with a new transmission, and at the end of February 2011, I packed up my Vancouver condo, sold most of my possessions, and packed what remained into the Defender and began what was to be a one-year nomadic life as I traveled around North America.

And then I fell off the wall in Pisa, and took 4 months to get Jessie back from Atlanta where I left her to fly to Italy. In all the chaos of recovery I needed to register and license Jessie in Ontario, my temporary home while I recovered. That registration required a safety certification which I learned Jessie would never pass. Not even close. Extensive corrosion in the frame forced me to take her off the road. There’s a good chance repairs are not an option, leaving me two choices – replace the frame (in other words, re-build her completely), or sell her to someone with more time and resources to do a restoration. I’m still mulling it over, but the end is the same: if I want to resume my nomadic life – and I do – then Jessie and I need to say good-bye. If you want to say “I told you so,” get in line. In the meantime, I’m unrepentant – Jessie and I had a great time while it lasted. 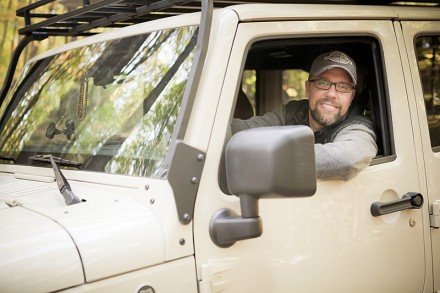 So, enter Emily. Emily’s a 2011 Jeep Wrangler. And in February, when I get back from Ethiopia and Kenya, I’ll finally (finally!!) pack my gear up and resume my journey. This time I’m taking much more time to see, and photograph, the American west, spending as much of 2012 as I can. If I move back to Vancouver it’ll be late Autumn 2012, but the nomadic life suits me very well, so we’ll play it by ear. Until then I’m living lighter and lighter as the days go by – a desire of mine made easier by the fact that there’s just a lot less room in the back of the Jeep than the Land Rover. This return to simplicity, something I once embraced much more easily, has made more room in my life and my heart & mind for the most important things. The last year has been the most profound gift. 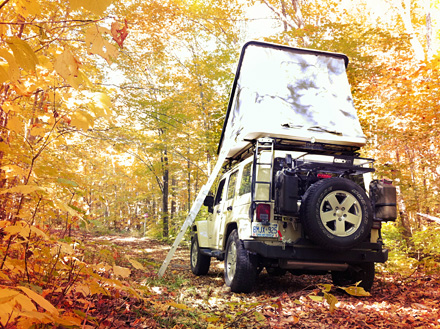 I’m still choking on the need to take Jessie off the road, but as much as I love the Land Rover, it is the journey and the adventure I love most. So yes, the Jeep is sexy and new, and she’s comfortable and fast. But character is earned, not purchased, so she just needs some adventures and some miles under her wheels before I enjoy her nearly as much as I did Jessie.  I spent this past weekend enjoying the fall colors on the snowmobile trails at my family’s cottage on the south edge of Algonquin Park, and I think Emily and I are going to get along just fine.

Can’t wait to pack my cameras and tripods into the back and get back to the journey. We’ll head south along the eastern seaboard fairly quickly (give me a break, it’ll be February and I’ll be camping!) and after a week or so in the Florida Keys, I’ll head west. I plan to spend as much time as I can, slowly, in places like Utah, New Mexico, Arizona, California, Nevada, etc. And I’ll be at the Overland Expo in Arizona for the middle of May. If there are any overlanders among my readers, I’d love to see you there and buy you a drink.