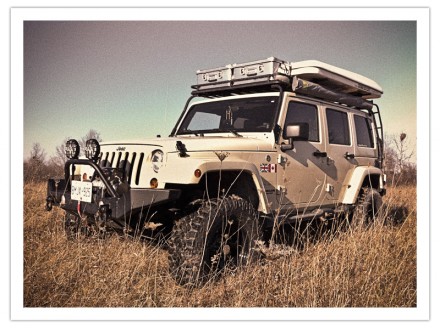 Emily, just back from the final trip to the outfitters and ready for February.

A friend once told me to watch the Pixar movie UP. Aside from the fact that I was crying like a little girl within the first 10 minutes (be warned), there was something about it that resonated powerfully with me. Part of that was the exploration of the idea of adventure. The phrase “Adventure is Out There!” is sounded often in the movie, like an anthem, and while that adventure generally refers to the journey of the unlikely heroes to Paradise Falls, South America, it’s also clear that, for at least one of the characters, the greatest adventure was love. It’s touching, and it should be no surprise to anyone the comes here once in a while that I’ve come close to having Adventure is Out There tattooed over my heart.

In February, a year after I started the adventure that went wildly off the rails, I’ll resume my road-trip, but it is not a resumption of the adventure; the adventure never stopped. No adventure ever goes to plan, and if it was adventure I wanted when I set out in my ’93 Land Rover Defender, JESSIE, it’s adventure I got. I made photographs in the rain all the way down the Oregon coast with my friend Dave Delnea, until he got into the Poison Oak, became so hideously deformed he was scaring children, and had to leave the country. I photographed and camped in Death Valley with my best friend and manager, Corwin, and then through Monument Valley and Zion, and into New Mexico, camping the whole way, and photographing as we went. I drove to the Gulf of Mexico. Spent time in New Orleans. Hung out with friends in Atlanta. I flew to Italy and fell in love. I also fell off a wall and shattered my feet. I came home and crawled my way through healing until my bones mended and I went to rehab. And then a couple days after they let me go home I jumped a plane for Laos, Cambodia, and Thailand, where, among other things, I joined 8 new friends as we floated down the Mekong River in a long-boat. And then there was Oaxaca, and Roatan, and then Antarctica. So much of it was unexpected, so much didn’t go to plan. And all of it was gloriously life-giving. And as strange as it sounds, I truly wouldn’t change a thing. This has been one of the most extraordinary years of my life.

I don’t want it to end. Being nomadic is teaching me so much, and while I’ve been sojourning at my family home for the last few months, and while I learned to walk again, I got more time with my family than I’ve had in 20 years. You can see why the idea of returning to so-called normal doesn’t really appeal. So on February 01, I return from travels in Ethiopia, Kenya, and Tanzania, and pack EMILY (above. I’ll do a Jeep-geek post some other time) and head out.

Adventure is out there, but it’s also in here. It’s an inner game. What separates adventure from the mundane is an openness to the unexpected and a willingness to embrace it, laugh your way through it when you aren’t gritting your teeth, and learn from it. It’s not a freedom from fear, it’s an unwillingness to let it have even one day of your already beautiful, short, fragile, one-of-a-kind life. It’s being present, 100% in your art, your relationships, the way you raise your children, and the way you open your heart to strangers. You can do that from a hospital bed, unable to move, and you can do that from the base camp of Everest. It’s a choice, a posture of the mind and heart. It is not the exclusive domain of the privileged, the healthy, or the strong. It is for all of us that, if you’ll pardon the worn cliche, are willing to hear the music and have the courage to dance without shame.

Tonight we launch Vision Is Better 2, the follow-up of the first one of the same name. It’s 44 essays, almost all previously published here on this blog, about the photographic life and craft. It includes much of my own adventure from this year and lessons learned. And it includes a couple un-published essays. Essentially it’s a sweet re-design of the best blog posts from the last year, available in one place, off-line, and always available. It’ll be available right here on the blog, with discounts as usual during the first week after launch. Whether you chose to buy the book, or not, thanks to you all for being part of this amazing adventure. Some of you were with me, in this blog, Twitter, and FB, through my darkest times, and made them lighter. Some of you were with me in Italy when I fell, in Laos when I made my first scared steps back to traveling, or in Antarctica as I experienced what it feels like to create work I love for the first time in a long while. Thank you so, so much. You remain my fans, friends, and family, but more than that you remain, in the most sincerest terms, my heroes. Thank you.