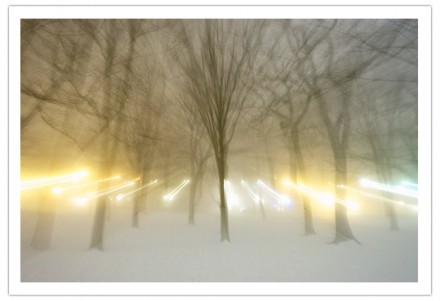 After an amazing night in Quebec City, wandering around in the fog and snow, we drove to New Brunswick and then to Maine. And when I say we drove to Maine, I do not mean we drove into Maine. We tried. But after 5 hours of questioning, an extensive vehicle search, and a second interrogation, I was told I was being denied entry to the United States of America, because “we have no proof you’ll return to Canada and we worry you’ll try to live here,” which nearly had me on the floor with laughter because, ahem, how do I put this? I like living in Canada. I have no desire to live in the United States. I want to travel the U.S., I want to photograph it, but I have no desire to leave my home. Which, as it turns out, is good, because they aren’t letting me. God knows they wouldn’t want a Canadian stealing the job of a Mexican. I just wanted to visit, man, not invade.

I was finger-printed, photographed, and made to sign transcripts of the interrogation on top of the line that said, “Signature of Alien,” which made me want desperately to sign, “E.T.”, “Mork”, or “Spock.” I couldn’t decide, so I signed my name on the form, and got back into the Jeep, grateful they’d only used the latex gloves while they searched the trunk of the Jeep, and not the trunk of, uh, ahem, me.

And so plans change and life presents new challenges. Last year it was shattered feet, this year it’s a breakdown in the diplomatic process. The reason for my denied entry, not technically a deportation because you have to be in the country before they kick you out and this law-abiding Canadian wasn’t even clever enough to make it that far, was that I have no fixed, verifiable address – a situation I’ve worked happily to free myself from. So instead of Maine, we’re heading to Nova Scotia. And then it looks like we’re hauling our asses coast-to-coast back to Vancouver, to find me a home, generate some paperwork, and get back on track to spend as much of 2012 as I can in the American West. Can’t say I am stoked about driving across this amazing country in the cold and the snow. But we’ll hit some amazing scenery, drive fast through the flat, frozen, parts, and spend time in Banff and then to Vancouver Island where the weather is stormy and amazing. And I’m not going to lie: I can’t wait to see Vancouver again. The home, wherever it is, will be just an office and a place to get my mail, and when I’ve got what Uncle Sam (right now he’s that creepy uncle that tickles too much, but I’ll get over that…) requires, I’ll be right back where I long to be.

So, for all of you expecting me to show up for beer or coffee, I’m going to need a rain-check. Thank you so, so much for you hospitality. I’ll be in touch over coming days. If there’s one thing I’ve learned it’s that adventures never go to plan, and the more easily you roll with changes, the more opportunities you find in the shifts and turns of circumstance. It’s taking me a massive shift to see 2012 differently than I’ve planned it, but Lord am I glad I’m not having to do it from a hospital bed this time. 🙂 I’ll keep you posted. For now I need a decent night’s sleep at this roadside motel, and tomorrow I’ll head to Nova Scotia. Assuming they let me in. 🙂