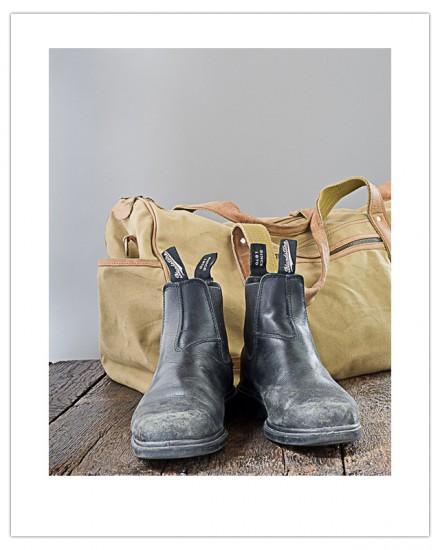 This is the beginning of a new project for me. A friend once commented that we (I think he meant me) mark our lives by the things we acquire. I think that’s less true than that we have an interesting relationship to those things. They help tell our story.

The boots above, for example, have been to 7 continents with me. They were on my feet when I fell from the wall in Italy and were subsequently pulled off (very painfully) my broken feet in the ER of the hospital in Pisa. They were on my feet when, a week before, I met my girl and began falling in love. They have gone through a lot with me. Next week I’ll be looking for another pair, my 3rd set of Blunnies in 7 years, so I can start wearing them in now. Mine feel so worn in now, they’re like slippers. I walk the world in them, I unfairly abuse them, and I wouldn’t wear anything else. They’re rugged, slip off easily at airports, shrines, and mosques, and with a polish they look like a million bucks. Almost every photograph I’ve ever made was made standing in, or near, my Blundstones.

The bag I bought this year in Kenya while on safari, just en route to Zanzibar. It’s a beautiful, soft canvas, trimmed with supple leather, and made in Kenya by Sandstorm.

Once in a while I’ll post one of these. Most of them will be travel related. All of them will be objects I love for the perfection of form, function, and memories, I see in them. I suspect by the end of the series you’ll know a little more about me, because I think the objects we deem beautiful, and the stories that make them so, say something significant about us.