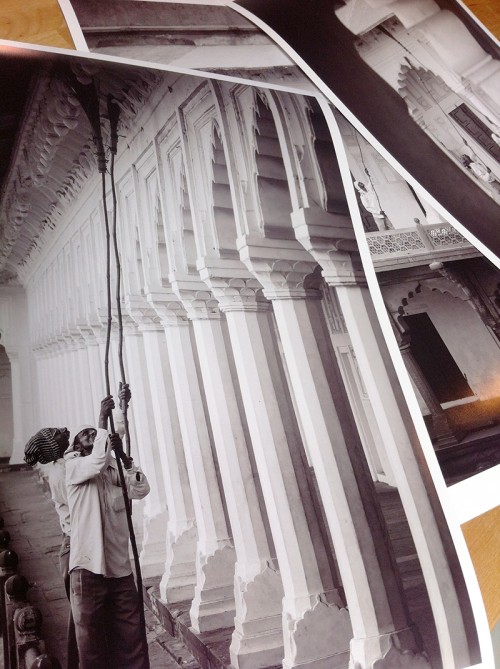 Last week I sent a collection of 15 images to Hemlock, the printers in charge of making my 2013 fine-art book called SEVEN. I wrote a post about my fears surrounding the CMYK conversions. I was equally nervous about how my black and white images would turn out after Hemlock’s pre-press ninjas converted them to duo-tones. I shouldn’t have worried. I got an email this morning from the head of the pre-press ninjas, telling me the proofs were printed and looked great, followed by call today from my account manager telling me she was near my loft and bearing my proofs in hand. 10 minutes later I was pouring over them and – I’m not ashamed to admit this – grinning ear to ear and giggling like a little boy. They look fantastic! The duo-tones use a warm grey for the second tone and they add a warmth and depth to the images that I’ve never seen in my own work. The CMYK conversions were spot on, and while there are a couple images that needed some compromise, they too look amazing (don’t judge from the photograph above, I shot it with an iPhone and, how do I put this? It lacks the subtleties of the actual prints 🙂

So where am I at now? I’m laying out the book, and while I’ve got two-thirds of that done, I’m saving one-third of the book for new work so a big chunk now just sits and waits for me to get back from Nepal, Antarctica, Kenya, and Japan.I’m way ahead of schedule but I’ve got the bones built now and can spend the next 5 months finessing.

I’ve decided to hand-sign every one of the 1,000 copies, so I’ll start doing hand exercises soon too. 🙂 Other than that, it’s the other stuff that’ll take time. Like boxes for shipping that need to be designed and printed (Hemlock’s doing that job too, and the boxes are going to be super-beefy to abundantly protect the books in shipping.) And figuring out what to include with the 100 Special Editions we’ll be offering, which at this point includes a copy of SEVEN+, a digital version of the book that is likely to be about 30% larger than the print book in terms of images and pages. And the linen for the cover has been ordered from Italy, and that’ll take 6-8 weeks so it’ll be 2 months before I see the dummy book Hemlock is creating for me.

I didn’t expect it to go so smoothly. It’s already been an exhilarating learning curve, but having this level of care and expertise at my side is one of the reasons I went with Hemlock, which is about 30 minutes drive from here, instead of offshore to China. My sanity is worth more than the dollars I’d save. And so are the years of experience this printer already has with award-winning work and picky artists.

Lastly, I’ve chosen a winner for the set of A/P’s I printed. The lucky winner is Craig Ferguson, a long time reader. Congrats, Craig. I’ll drop you an email asking for shipping info. If I recall correctly you’re somewhere in Asia, but we’ll get these off to you later this week. Thanks to all for the kind words about this project. I hope you can hold on to that enthusiasm, pre-orders are a few months away. 🙂