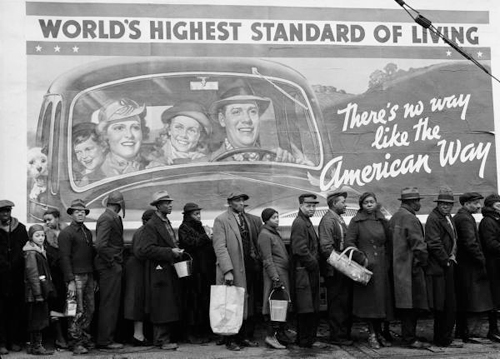 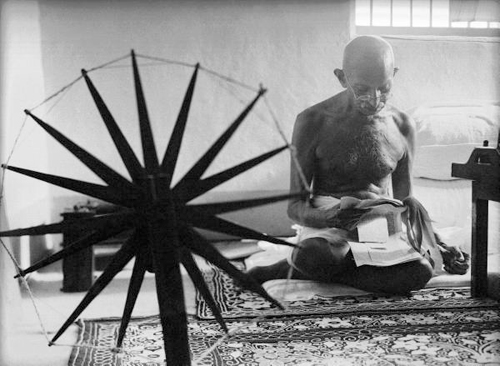 “If you want to photograph a man spinning, give some thought to why he spins. Understanding for a photographer is as important as the equipment he uses.” –Margaret Bourke-White

“Utter truth is essential and that is what stirs me when I look through the camera” –Margaret Bourke-White.

Margaret Bourke-White (1904-1971) died from the effects of Parkinson’s disease the year I was born. In her 67 years she accomplished an astonishing amount for one lifetime, for anyone, let alone for a woman of her generation. She is  worth studying not only for her work but an intentional life well, and intrepidly, lived. 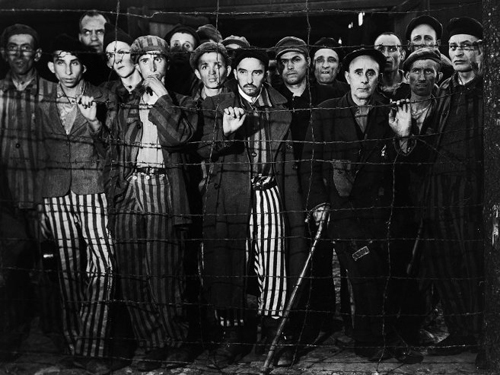 Bourke-White was an American documentary photographer, known for several things, all connected to her photography: she was the first foreign photographer allowed to photograph within the Soviet Union, was the first female war correspondent, and the first female photographer working for LIFE magazine.  What began as a career in in commercial photography was still one marked by a willingness to work – and thrive – in places into which women were traditionally denied access. One of her first clients was Otis Steel, and despite a battle to get onto the factory floors, she created some of the best steel factory photographs of that era, before moving on to work with LIFE, documenting the unfolding human drama of her day in the Soviet Union (1930) and the American south, before World War 2 began, when she became the first female war correspondent accredited by the US Army, and the first woman allowed to work in combat zones during the war, returning to the Soviet Union to document life there, giving the West it’s first real look at life behind the iron curtain. She was in Moscow when Germany broke the pact of non-aggression and invaded, and was the only foreign correspondent there at the time. Eventually she was one of the first photographers in to, and to document, the Nazi death camps, about which she said, “Using a camera was almost a relief. It interposed a slight barrier between myself and the horror in front of me.”

“The very secret of life for me…was to maintain in the midst of rushing events an inner tranquillity. I had picked a life that dealt with excitement, tragedy, mass calamities, human triumphs and suffering. To throw my whole self into recording and attempting to understand these things, I needed an inner serenity as a kind of balance.” ~ Margaret Bourke-White 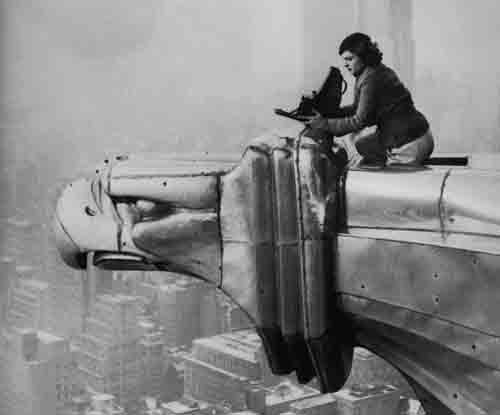 Margaret Bourke-White, working atop the Chrysler Building, by Oscar
Graubner (1934)

She seemed to have a knack for being in the right place at the right time, but I have a feeling it had more to do with dogged determination than luck. To wit: one of her most iconic photographs was one of Gandhi sitting at his spinning wheel, two years before his assassination in 1948. Before she could make the photograph, Gandhi insisted she learn to use the spinning wheel, which she did.  She became one of the most effective chroniclers of the violence that erupted at the independence and partition of India and Pakistan (1947).

“The camera is a remarkable instrument. Saturate yourself with your subject and the camera will all but take you by the hand.” ~ Margaret Bourke-White

“Any photographer who tries to portray human beings in a penetrating way must put more heart and mind into his preparation than will ever show in any photograph.” ~ Margaret Bourke-White

In 1949 to 1953 she photographed South African apartheid and the Korean War, eventually retiring from LIFE in 1969, well into her struggle with Parkinson’s.

Over her life she published 12 photography books, and an autobiography, Portrait of Myself, in 1963.