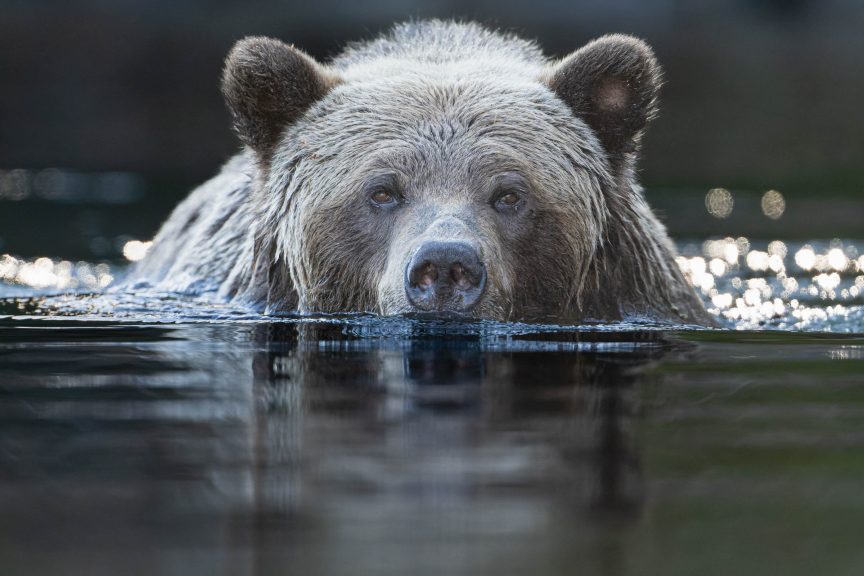 There is a powerful argument to be made for photographing what intrigues you, what you love, or that by which you are obsessed. Making photographs takes time, so that curiosity, love, or obsession serves you well when your best work demands not fractions of a second or even minutes, but hours, days, or—in the case of longer projects—even years.

Bears have become a growing obsession for me. I don’t know where it comes from or what part of me these bears touch so deeply, but it’s not unlike the feeling I get in the presence of other large creatures like leopards, lions, sharks, or whales. Maybe it’s the notion of something bigger than I am—something so entirely other.

I’ve just come back from another ten days with the grizzly bears on the shores of the Chilko river. They converge every year in the fall as the salmon arrive in their hundreds of thousands (a million this year) to spawn where they themselves were spawned four years prior. Those salmon have spent the last three years in the ocean and have now climbed 3,000 vertical feet to return here to guarantee there will be the next generation, and then they die and return their nutrients to the water, the bears, and the forest. For their part, the bears have come to feast and fatten before climbing the nearby mountains and denning for the winter at 8,500 feet. The females who have mated earlier in the year will depend on this food. If they reach 33% body fat or higher, they will become pregnant through delayed implantation as they lie in their dens, gestate for only six weeks, and give birth over the winter. When fall comes, those cubs (known as cubs of the year) will join their mother as she teaches them to fish and feast on the salmon.

So on September 28, I loaded my gear into Lucy (remember Jessie, the Defender, and Emily, the Jeep? Lucy is a new-to-me Toyota Tacoma that has recently become my new adventure partner) and headed north, picking my way through the coastal mountains and lakes around Whistler and Lillooet before driving through the stunning Cariboo and Chilcotin—the foliage on the aspens at their golden climax—and finally to the Chilko River, filled with a million sockeye flashing red under bluebird skies. It’s a place of such wild beauty that it’s hard not to get a little wordy about it.

After ten days of photography, I drove home with hard drives full of images and a heart and mind filled with memories of bears swimming through waters so heavy with reflections that they might as well have been swimming through paint. And the light! The backlight, the reflections, and the colour still blow my mind days later as I work my way through the photographs I made.

This last trip marks the beginning of my second year with Sony gear. I came home a little frustrated with the limits of my FujiFilm gear last year, finally admitting to myself that what it did so well on the streets it didn’t do so well with wildlife. The focus speed and the availability of truly world-class optics for the Sony make my work so much easier (not necessarily better; that’s on me).

I’m now using a couple of Sony a1 bodies and primarily shooting a 600/4.0 lens, and though I’m not a “gear guy” in the way some photographers are, I’m almost ashamed to admit how much I love this gear. It just does what it’s meant to when I need it to, and after the frustrations I had with FujiFilm, it’s refreshing to put the camera to my eye and nail the focus the first time, which means fewer unpleasant surprises. So for those of you who have recently asked if I’m happy with my move, I couldn’t be happier. I don’t love the Sony brand (it’s not sexy the way Nikon or Leica is), and I don’t love the ergonomics the way I loved my FujiFilm cameras, but the performance is out of this world better for me.

I am shooting at higher ISOs now, not so much because my wildlife work happens in darker situations (though that is sometimes the case), but faster-moving critters demand higher shutter speeds (1/1000+) than I ever needed on the streets (often closer to 1/30 or slower). So I’m regularly hitting ISO 6400, and while the thought of that once terrified me (I still remember stressing out about going to ISO 800 on my early digital cameras), I’m much more relaxed about it now—but I haven’t always been happy with the results. Enter DxO PureRAW 2.

PureRAW 2 is a plug-in for Lightroom, though it can also be used as a stand-alone product. It’s a little clunky to use, but the results are astonishing. I’ve been a bit frustrated with my own efforts at noise reduction and sharpening in Lightroom, so I asked my best friend Jon what he uses, and because he’s much smarter than I am, I decided to give it a try. I’ll let you read the online reviews for yourself if you’re into that, but I wanted to at least alert you to it because I’m honestly gobsmacked by what I’m seeing.

Here’s a brief overview: import your images, find the best of the best, and then (here’s where it gets clunky) choose your image (or folder of images) and go to File > Plug-in Extras > Process with DxO PureRAW 2. A dialogue then appears, you set a couple of preferences (like what you want to name the new file(s)) and hit the Process button. PureRaw 2 then creates a new sharpened and de-noised (and lens-corrected) DNG file for you. It also renames it according to your preference (I add DxO to the end of my file name), and it then puts it where you want it. Now you can process the new DNG file the way you normally would. And if you’ve already done your development, let’s say with years of older images you’d like to clean up, there’s no need to start over; your changes will all stick in the new DNG file.

So how good is it? The noise reduction, sharpening, and lens corrections all happen together and dramatically exceed my own efforts. You probably already know that I don’t get too excited about how sharp images are. If that’s what people are commenting on, then you’re probably not making very interesting photographs. But if noise or lack of sharpness are getting in the way of what your photographs could be, then I say use whatever it takes. Maybe I’m late to the party on this one (story of my life), but if you’ve never heard of DxO PureRAW 2, then check it out (and yes, it now works with FujiFilm X-trans files, of which I have thousands and a few that will really benefit from what PureRAW 2 can do). Here are before and afters on two of my images that I think show the results quite well:

For larger prints, this is going to change everything and make me much happier with the resulting photographs.

By the way, the DxO people wouldn’t know me from Adam, so I’m not getting a penny for talking about it (I paid full price for my version), and I’m not recommending the product so much as saying, “Hey, look what I found!” My own exploration of this plug-in is very new at this point, but so far, I’m really impressed. DxO offers a 30-day free trial here, and is only USD$129 to purchase. Not to overstate it, but it might be the best $129 I’ve spent on my photographs in a long time.

Enjoy the bears! I’m off to Churchill, Manitoba, to photograph polar bears next week. I’ll touch base when I’m back!