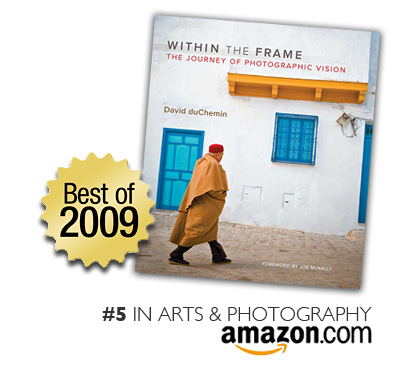 You could have knocked me over with a feather (whatever that means) when my publishing team emailed me yesterday morning to let me know that Within The Frame was chosen by Amazon.com as one of the best books of 2009 in Arts & Photography. It came in 5th, after Joe McNally’s Hotshoe Diaries, Scott Kelby’s Digital Photography Book, Volume 3, a tattoo book by Kat Von D, and PostSecret by Frank Warren. So in a rare moment of rather self-conscious horn-tooting, let me just sound my barbaric WoOt! from the rooftops of the internet. (ahem, woOt!)

This kind of thing doesn’t get old, I have to tell you. I’m still a kid in a candy store about all this stuff. Eyes wide and hardly able to take it in. People think you write a best-selling book and that all this stuff is just life as usual. It’s not. I still think one day they’re all going to wake up and realize they’ve mistaken me for some other photographer of the same name. So until then, these moments are going to seem pretty surreal.

Huge thanks to you all who support my habit by buying these books and telling others about them. I’m so grateful. Please be sure to buy and promote VisionMongers with the same zeal because I’ve just committed to buying an island in the South Pacific and this banana republic ain’t going to pay for itself. 🙂 Seriously, thank you; I’m humbled by this kind of thing. I still get giddy  and say stupid things around Kelby and McNally, so it’s a little weird to be in their illustrious company.

To give you an idea of why this is so cool to me; when I was in grade 7, I entered a school-wide cartoon contest. I drew a wicked cartoon. And I won second place. Which would have rocked except that I was the only one that entered. I’m still bitter but this kind of thing eases that old pain just a little 🙂

The rest of the list is HERE on Amazon.com