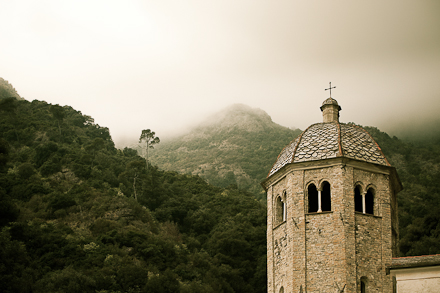 Continuing my tradition of posting totally unrelated images to illustrate a point, this is the abbey at San Frutuosso, in Italy.

I had a video chat with Dane Sanders and a virtual room full of folks on AskDane.com this week and one of the questions touched on an itch I’ve been meaning to scratch for a while. And now I’m beginning to read Art and Fear, Observations on the Perils (And Rewards) of Artmaking, by David Bayles and Ted Orland. So the time is right to scratch that itch publicly, if you’ll excuse the somewhat indiscreet metaphor.

The question that was asked was along the lines of the kind of advice I’d give to people starting out, specifically those wanting to make a living with their photography. My reply is the same whether or not you ever intend to make a dime at your art: Take more risks.

Art, like love, like business, is about risk. We risk that our work will fail. We risk that no one but us will like it, and then even we ourselves are bound to be overly critical. We risk that we’ll never be the genius we wish we were in a culture that seems only to honour the very few extraordinarily talented ones (whatever that means), or the ones who market themselves best as such. When we could have taken a so-called real job instead, we risk not making enough to make ends meet each month. We risk rejection from the critics and our peers, or even worse – indifference. We risk disappointing those closest to us.

Or we don’t. We have a choice; the alternative is to risk nothing, remain safe, and create art – or run a business – that comes not from a place of vulnerability and transparency, or a place that’s truly, uniquely ourselves, but from the surface. We might even do well commercially, creating from this space (afterall, there’s plenty of money in creating crap) – but even if it rises above the mediocre it will never, ever – and this is the point – say the thing our soul has been wanting to say. We will always be dissatisifed.

Art is about risk. Anyone that tells you otherwise is a fraud. It’s not easy; it’s hard, and it’s risky.

But so is everything else. Because really, this is about your perception. It’s about feeling that something is risky, and that feeling keeps you from doing it. We feel secure in our 9-5 cubicle job, while the idea of forging out on our own scares us because it feels insecure. But why? Are you sure the monkey at the top of Cubicles Inc. knows how to run a better company than you? He might, he might not. But are you sure? Are you sure the markets are stable? Are you sure that job, that pension plan, that <insert name of your favourite safety blanket here>  is as secure as you think it is? And what of the risk of failure? Again, it’s about perception. We all fear failing publicly, creating something that’s not critically acclaimed, even if the critics are morons. But what about the fear of a life fully lived? What about the fear of never seeing your work realized, your ideas fleshed out, your words unsaid and images unmade? Isn’t playing it safe even riskier?

A few weeks I wrote a couple articles about beginning the work. This taps that theme. What’s holding you back from creating the work you truly want to create? Your market? Your peers? Your blog readers, your fans or Twitter followers? Your spouse? I know it’ll feel like a risk to step out into a space where you can create boldly, and fail more boldly still on your way to making your art. The question isn’t, Should I risk? Of course you should! But we’re already risking. The question is, Which risk should you take? Which risk scares you more – the risk of failing, of thrashing about creating a bunch of crappy images on your way to creating something great? Or the risk of doing nothing, watching your ideas gather dust while the images in your mind go unexpressed, unmade, as your life passes.

Life is short. You can take this little sermon or you can leave it, but the longer I live and look around at the people who’ve carved out for themselves a unique life in business or art, or any field of endeavor for that matter, they’ve all of them done so while risking. They’ve failed, they’ve learned, and they’ve tried again. Some of us have failed personally in embarrassing ways, and we’ve gone bankrupt, and I’m not suggesting you take that route, but where it counts – where it really counts – to get where you most want to go involves risk. If it didn’t you’d already be there. Some of us will take that risk, some will shy away from it. The people on the shore always outnumber the ones willing to brave the water. And they almost always desperately wish they had the courage to take that first step. There’s no guarantee of success, even if we risk it all, but there’s no surer way to failure than not trying.

Please note, I’m not talking about stupid risk. I’m not telling you to put a new Hasselblad on the credit card. In fact, that will only make risking where it really counts that much harder. Clear your debt, live within your means, and you’ll have one less reason not to risk, to do that personal project, to fund that gallery show, to set time aside to finally put that photo book together. I’m talking about the risks that are much harder to commit to, the ones that keep us from getting down to creating something potentially great, true, and unique.

We’ve so much to gain; the creative life is so rewarding if you’ll take the risks. Who’s in?