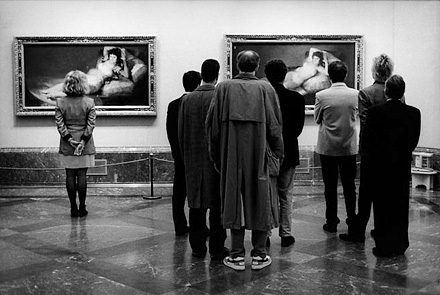 During my time in NYC I met Elliott Erwitt again. Not in person, but through his work. It’s been a couple years since I first looked at Erwitt’s work and for some reason seeing it this time made a significantly different impression on me. In fact, Erwitt kept popping up. The first time was in the Chelsea Market, an installation of his Italy work was there – probably about 30+ images. And then I saw his work on postcards in several stores, each time thinking I should really pick some up and never did. Finally I found myself in the Phaidon bookstore standing in front of half a dozen limited edition Erwitt prints, trying to will myself not to shell out for his deeply intimate photograph of a man – Robert Frank, as it turns out – kissing his wife in a kitchen in Italy.

Erwitt’s work has so many layers of Impact it’s hard to know where to begin, but the two that strike me most often are his sense of timing and his sense of humour, both of them often in the same moment – timing being one of the keys to great comedy.

I’m always of two minds about looking at the work of others. At the wrong time it gives way to imitation – good for flattery and even for a certain stage in the learning process, not so good if you stall there. But there’s so much to learn from others and how they see, and I couldn’t believe how utterly transported I was by Elliott’s work in Chelsea market. I stared at some of the prints, and while aware of the technical prowess they exhibited, it was so much more than that and THAT is where I want my work to go. I want my work to be so much more than the sum of its technical parts, so much more than just a bunch of layers of impact. I want my work to resonate with others the way Elliott’s does for me – because when I was done looking at his work and sat on the plane reflecting on it on the way home, I wasn’t thinking about how great the photographer was – I was thinking about the moments, and the magic of life itself: something heavily on my mind since a close friend discovered she had incurable brain cancer. Life is short and photography is a means by which we can expand it, reveal its hidden corners, notice even the most minute and fleeting moments. It’s not about photography, it’s about life. Erwitt does that for me and that makes him worth spending some time with.

See more of Elliott Erwitt’s work on his website HERE though the work on the website is not, in my opinion, anywhere near his best. But his books are on there and worth a trip to Amazon or your local library to spend some time with him.