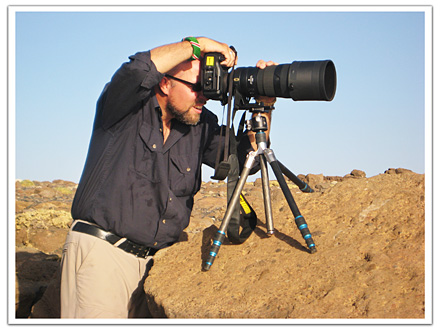 As many of you already know, my transition to Nikon happened much faster than I anticipated. I got a lot of curious emails and tweets about The Switch, but very little of the rabid fan-boy nonsense I worried I might get. Late last year I got two new Nikons, and last month sold all my Canon gear, sending it to good homes from Vancouver to Utah to Malaysia. I am now shooting Nikon only, with the exception of the Canon 5D and 17-40 lens still sitting in an Aquatech housing for underwater work.

Initially I took the cameras to New Zealand, loved working with them, and now, coming off an almost 4-week African adventure, I thought I’d finally give in to the questions about how I’m liking the new gear.

My first reaction surprised me, though it shouldn’t. I love, love the new gear. But now that I’ve shot with the best that Canon and Nikon offer I can honestly say I care even less than I once did about the brand wars. No brand will make you a better photographer, nor will the new Nikon D4x II or Canon 1Ds Mk XXI. You do that. Through long years and humble work and seeking good critical voices to listen to. So if I get even one question about whether my photographs are better now I swear I’ll publicly wrestle you to the ground and make you wear the Cone of Shame.

What do I love about the two Nikon D3s bodies I’m shooting with? They fit me better. I just like the way we work together. Buttons are where they belong for me. The shutter, and the rest of the camera feels more solid. It’s weighted in a way that I like. The low-light noise is amazing. They focus beautifully most of the time and when they don’t it seems simply to be the slightly slower Sigma lenses I’m using. But put the Nikon 300/2.8 VR II on there and wow! These bodies performed incredibly in the most gruelling conditions I’ve ever shot in, taking daily abuse in temperatures of up to 45C/113F and never failing after 2 weeks of brutal off-road bouncing around in bags with little padding. The sensors on both are pretty dusty right now, but that’s not their fault; it’s a mix of Sigma lenses that don’t seal at the body, and my too-casual attitude about tools being tools. I switched lenses more and was slower to put the cameras in bags this trip.

What else do I love? The same thing I’d have loved if this switch were from Nikon to Canon: the forced change of my creative process. Suddenly I’m having to think about my tools again and where I once might have chosen a series of settings out of habit, I’m forced, through unfamiliarity, to be very intentional about things. The discovery is a lot of fun and I think when you re-inject fun into your process you give the muse some room to dance.

Do I miss anything? Sure. I loved Canon’s big scroll-wheel on the back. I miss knowing where everything is without thinking. I miss my 85/1.2 lens. But really, no. A camera’s a camera and while I like working with these D3s bodies a whole lot, I’d be crazy if I told you they were “revolutionizing my photography” or finally allowing me to “shoot like a pro.” Ugh. Was it worth the switch? That’s a tough one to answer. For me, it was, but those reasons are unrelated to whether the cameras make better photographs. If that’s why you’re switching, save your money and spend your time making more photographs.

And what about Sigma? Sigmas lenses continue to surprise me. For the money, they perform beautifully. Yes, the 70-200/2.8 feels slower at times, and they don’t seal at the body like most of my Canon L lenses did. But their 85/1.4 and 20/1.8, for example, are sharp and create beautiful photographs. I got on board with Sigma because I like the idea of making photographs with a stable of lenses that are a little more financially accessible to the people I teach. And, to be honest, I’m a little tired of the whole “Well, sure, I could make great photographs if I had the new Nikon/Canon 10-200/2.0 VR III” nonsense. Work with what you have. Sigma, so far, has not let me down. Weirdly, I’ve had f/0 or f/92 show up as my f/stop a couple times but I think that’s just filthy contacts. Once the cameras and lenses are cleaned I’ll keep you posted.

Yes, there are cameras that allow us to meet client needs better, and some cameras are faster than others, so pragmatically one may be better than another for one person or one need, but I’m hoping we’re all becoming a little more savvy about the brand wars, a little more aware we’re being manipulated. I’ve said it before, I’ll say it again: photographs matter, brands don’t. I’d happily go back to Canon and keep photographing beauty as I see it. Right now I’m liking the Nikons, but folks, I’ve got a used D200 coming from a friend and I plan to use it to make beautiful photographs too and I’ll bet the farm no one looks at those photographs and says “Well I could make images like that too if I had a fancy obsolete D200.” It just ain’t the tools. So if you’re relying on a different brand, newer and shinier body, another fancy lens, or an HDR tutorial, you’re looking in the wrong place.