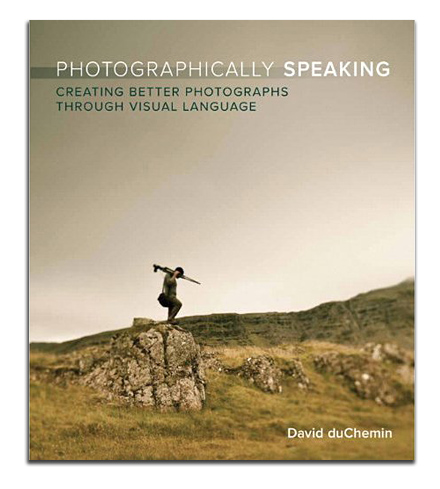 A friend just alerted me to the fact that the book I am this very moment writing has been posted to Amazon.com for pre-orders. Which means I need to get my butt out of the Land Rover and into a chair where I can finish the writing. It also means I can tell you about it a little more freely.

Photographically Speaking is the fourth in a the Vision Trilogy and before y’all get on my case about the mathematical impossibilities of a 4/3, I direct you to the recent trend in Four-Thirds cameras. Same deal. 🙂 Regardless, it’s the logical follow up to Within The Frame and Vision & Voice. Where Within The Frame was about the role of vision in our work, Photographically Speaking is about the way we express that vision. The subtitle you see on the cover above is still being tweaked but reflects the core of the book – this is a book about how we express ourselves through the language of the photograph. Here’s a somewhat lengthy clip from the Introduction (ok, it’s pretty much the whole Introduction) that explains it better:

The notion of communication and expression are key to this book. If in the past I’ve overused the word Vision too much, this book runs the risk of overusing the word expression. As important as our intent for a photograph is, it remains only inside, unrealized, until it is externalized. Poets, songwriters, painters, dancers, jazz pianists, comics, and countless others, all have their own ways of getting the inner stuff out. We have the photograph. Not the camera; the photograph. The camera is merely the tool. The photograph is the very expression of that inner thing bursting to get out. How we make that photograph, with the tools at our disposal, and how close it comes to expressing what we hope, determines how successful that image is. To do that well, we turn to the language spoken by the photograph.

It’s like this with all art. The cellist uses the cello, but it’s only her tool. Her language is music, with which she expresses herself, through the skilled use of the instument. The mournful adaggio echoes in our soul and brings us to tears because she knows the language of music so well she can wield it with the nuance and subtlety needed to strike our deepest parts. She knows what she wants to say (vision/intent) and the music lets her do that right up to the limits of her own ability to wield her tool. The poet uses language in the same way; the broader his vocabulary, the greater command he has over grammar, and the more creative he is in juxtaposing one word with another to create new meanings and implications, the more clearly he can express himself.

Photographers, too, have a language. It is awareness and use of that language that allows us to move on from merely having vision to being able to express it. That language is unique to us alone, though not unconnected to the language employed by painters and graphic artists. What we share is the frame and the constraint of two-dimensionality.  The better we know the language, the greater our expression. It is in this sense that this book is called Photographically Speaking.

But there’s another sense too, and that sense is what first suggested this book. I often teach photography in the context of workshop tours in places like India, Nepal, or Kenya. I don’t usually lecture or even hold formal classroom sessions during these times because I mostly assume that anyone coming that far already knows the basics of their craft. If you show up for a workshop with a musician you respect and want to learn from, they aren’t likely to have you doing scales all week. You can do that on your own time. What we do, instead, aside from spending hours making photographs, is talk about photographs. Almost every day I ask my students to each submit one image that we can talk about. We have certain rules, but mostly it’s a free-for-all with the goal of learning to speak about what we see within the frame, what elements are there and what decisions the photographer made that led to this particular photograph, and what it says.

What first surprised me when I started  teaching this way is how universally hard it is for photographers to talk about photographs. To some degree, I get it. If we were all good with words we wouldn’t likey have turned to the camera to interpret for us. We don’t always have the words. However, I think the situation is more dire than a lack of words; it’s a lack of understanding. We simply don’t know how to think – and therefore to speak – about photographs.

It is always amazing to watch my students become comfortable with this process, begin to work through this stuff and become able to think about photographs. Without exception that process helps them create stronger photographs that more closely align with their vision, their original intent. So that’s the second meaning of the title, Photographically Speaking. Greater awareness of the language leads to an expanded and refined ability to use that language to express ourselves. We’ll use the process of speaking about photographs to teach us about the language of the photograph, and in turn to make us stronger photographers. In part this book is an effort to re-create those teaching times that I’ve seen so many times in places like Venice or Kathmandu, opening the eyes of students to the power of a photograph when the visual language is wielded well.

In a sense, this book is the logical follow up to Within The Frame, and the one out of which Vision & Voice would have more naturally flowed. Both books are different conversations about similar things, all of them connected by the idea that a mindful approach to our photographic process – being conscious of what we want to say and how we want to say it- will lead to images that are more able to express that unique inner voice that seems to prefer the camera as a means to getting those words out and onto paper. In our case the words are the elements around us, the paper is the print. We’re left with arranging those elements within the frame. Vision isn’t the goal. Expression is the goal. That’s where the visual language comes in.

This book is meant to simply introduce some key concepts in language that is as accessible as I can make it. It’s not meant to be a substitute for more academic books about composition and visual literacy, if your interests eventually run in that direction. I do, however, believe that you can understand visual language, that you can create expressive and compelling photographs without diving into academics and million-dollar words. I believe that a grasp of what’s going on within the frame, and a mindful approach to creating photographs that speak this language, is enough to create powerful photographs that express or communicates something within us.

So there it is. I’ll talk more about it in the coming weeks and months. Despite the jokes, I am well into the writing and have most of the words down, and am meeting my deadlines. At this point the book is slated to be released at end of August this year. Click the image above to go to the Amazon.com page. There’s not much there just yet, but I assume it’s coming soon. Thanks to all of you who’ve read the past books and thereby made this one possible. I hope this one’s as helpful in your journey as the past ones have been.