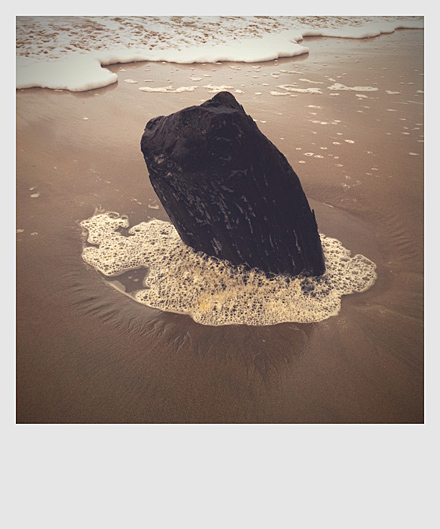 This March, I spent more time making photographs with my iPhone down the coast of Oregon than I did with my D3s and Pelican cases full of gear. Many of the images I made in those days are among the best of my recent photographs; unobstructed by all the gear I was more able to play. But not once did I simply point and shoot.

Point and shoot is an attitude, an approach to photography; it is not – nor to my mind should it be – a category of cameras. So while this post is more of my usual hair-splitting over semantics, I believe it’s important. It’s important because it says something about how we think about the tools we use and – more importantly – perpetuates the same kind of nonsense as the trumped up importance given to Pros. As in, Buy This Camera, Shoot Like a Pro. The implication is that we should want to shoot like a pro because to be a Pro is to be at the pinnacle of this art. I call bullsh*t. But that’s not my point.

When the Fuji x100 was announced there were mixed reactions, as they always are when a new piece of gear is released. We polarize so quickly on some of this stuff. Many of the reactions could most easily be summed up in a comment from a friend on Twitter this evening.  The x100 is just a $1200 point and shoot camera.

It struck me as a funny thing to say. And the more I thought about it seemed completely irrelevant. Not the comment, so much, but the fact that that comment should even mean something to me. And that something is: that’s serious money for a camera that’s not serious. Might not be what my friend meant, but it’s what I inferred and I’ve heard it elsewhere unambiguously.

So what makes a camera serious? Must it be a $3200 body with a $1800 lens? Does it need a certain sensor size? Must it be a DSLR? At the most basic our tools are boxes with a hole in them. Our media are time and light. We use optics to create a quality of focus and manipulate the geometry in the frame. We need to control the amount of light coming into the box, knowing that doing so with aperture and shutter allows other aesthetic effects. But as far as I know, beautiful photography has been created with pinhole cameras, antique rangefinders, and iPhones, as surely as a Ltd. Edition gold-plated Leicas and $10,000 pro-bodies have produced an astonishing quantity of crap. The recent enthusiasm towards plastic lens cameras (eg Holgas) is a great example. I’ve seen some incredible work created by photographers using the Holga and I’ve seen work I think we’d all agree was junk, even with a gracious and liberal allowance made in order to avoid being called a “snob”.

My x100 is a beautiful camera. It does everything my Nikon D3s does in terms of creating a simple, compelling photograph. It has constraints, to be sure, but I see those constraints as an opportunity for greater creativity, not less. I’m unlikely to serve clients with this camera, but I’m very likely to create work that I’m most proud of with it. And at no point would I describe my approach to photography, regardless of the camera I hold in my hands, as point and shoot.

Point and Shoot. The words imply automation. They imply a lack of intention and care. And to me those words trivialize the efforts to create something beautiful with these fundamentally simple and elegant boxes. To me it’s about the way we approach the entire art, however it is we do that. I guess my point is this; you can point and shoot, if you choose to, but your camera can not. Having a serious camera is not the point and never has been, because in the hands of an artists, a child’s toy will create beauty. Client needs aren’t the issue, that’s different. That has to do with the best tool for the job argument. My plea here is that we alone accept responsibility for creating something great, and we do it with the camera we most enjoy.

I suspect I’m naive and idealistic in hoping we’ll see an end to some of this nonsense anytime soon. It’s perpetuated by the same engines of commerce that want to convince every still photographer that their career is in peril unless they learn video – a completely different discipline and language. I’m probably banging my head against the wall, and I’m OK with that. Where I take it personally is when my friends, readers, and students –  people new to the craft and so full of enthusiasm – are convinced every 12 months to part with serious money because they’ve been convinced the newer, bigger cameras, are more serious. And they go from promise to promise. Red herring to red herring.They learn to divert what was once an enthusiasm for making photographs to an enthusiasm for better and better cameras. God forbid they should be caught making photographs with a point and shoot camera.

Get a camera you love to use. Make photographs you love. If that’s a simple, used, $50, beat-up 35mm camera, or a $700 iPhone, or a $10,000 Mamiya, just do what you love: make photographs. Leave the pointing and shooting for others. Your photographs are judged on their own merits, not the tool you used to create them.