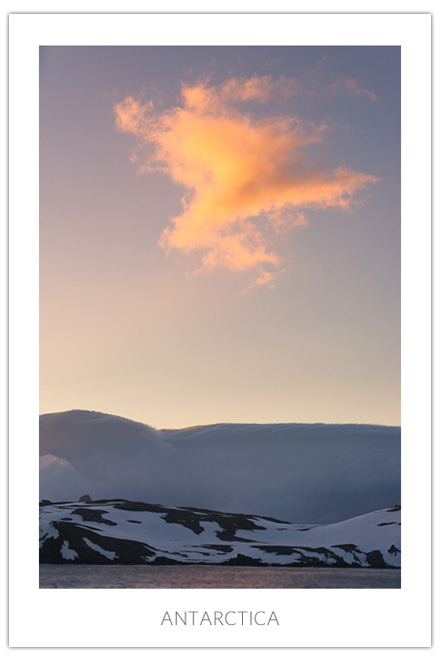 To say that it takes some time to get to Antarctica is an understatement. After 20 hours in the air and a couple days in Ushuaia, we boarded the Quark Expeditions vessel, Ocean Nova. Then for 48 hours we sailed south. You’ve never seen so many people wearing sea sickness patches behind their ears, nor so much fleece and Goretex. As it is we lost a good chunk of the nearly 70 passengers to sea-sickness, brought on by high winds and huge rolling waves. I mostly slept like a baby, and though I found walking around the ship a little challenging, I’m not sure it was really any harder for me than others.

It’s Friday, Dec 02, 3pm as I write this, and we’re fixing to load the zodiacs and land in the Aitcho Islands tonight to meet some penguins. Before that we’ve an hour of bio-security to go through, to prevent contamination of the environment with foreign species of grasses and bugs. I’m super-impressed with the folks running this, both the staff and crew from Quark Expeditions as well as Seth Resnick and John Paul Caponigro. These are the good guys and I’m thrilled to be spending time with them.

Internet’s not cheap onboard, but obviously we’ve got access; I think I paid $140 for 100MB of data. Once we get through the Drake I’ll be spending my time shooting and have no intention of ruining my new-found sense of remoteness with much time spent online, but at least this way I can drop you a postcard once in a while, and in a small sense take you along on this journey with me instead of just reporting condensed and vague impressions when I get home.

10:30pm. We’ve cleared the Drake now, and the photograph above (I hope it looks OK, images don’t load so well from here…) comes from moments after returning from our first landing. It’s an amazing thing to wander among thousands of pairs of chinstrap penguins who’ve never learned to fear humankind. Humbling. Beautiful. And the zodiacs? Bumping through the antarctic waters in high wind and waves is a blast. I’m now back in my cabin, downloading images and drinking a celebratory whisky – tonight I hobbled onto my 7th continent.  I’m a happy man tonight.

If you’ve not already seen it, or got your hands on it, don’t forget to download the free ebook from Craft & Vision. You can get more information on that HERE, and if you get a chance I’d be grateful if you told others about it as well. Cheers!