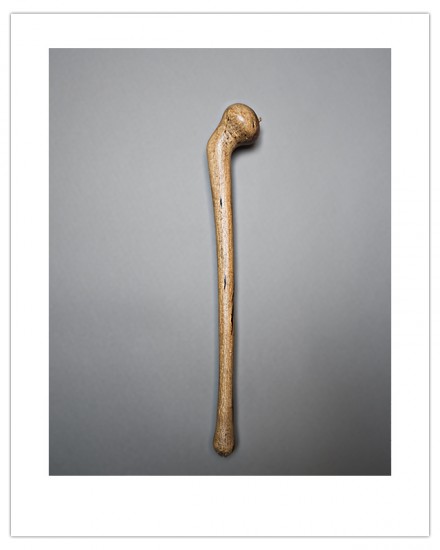 This is a rungu, an African war club, traditionally made of olive or acacia wood. It was given me by my village, Ongeli, in northern Kenya, but to get the full meaning of it, and therefore it’s full beauty, I need to tell the story.

I was in northern Kenya on assignment for the BOMA Project, making portraits of people from Samburu, Rendille, and Turkana tribes. One morning I was sitting in a low hut made of sticks and goat-skins, and in places, orange bedsheets, photographing and listening to the women talk, a flurry of beads and hand gestures, and conspiratorial laughter. Their discussion was heated and animated and there was a lot of pointing involved. Mostly at me. I was getting nervous. I asked Kura, my friend and the only one who understood the language, what these Rendille women were saying.

“They are talking about you, David.”

“No kidding, Kura. What are they saying about me?”

“They are arguing about your name.”

“Why don’t they just ask me my name?”

“No, they argue about your Rendille name.”

“Kura, I don’t have a Rendille name. I’m as white as they come.”

“That is what they are trying to fix.”

“They are adopting you as Rendille, into Ongeli Village. You must have a Rendille name.”

“You are Akeno. It means “He who brings good.””

I spent a few days here, and this place and the people there, among the poorest of the poor on this planet, mean the world to me. They are among the most beautiful people on the planet, their skin dark and richly textured, but smooth like leather, and their eyes often ringed with the most astonishing blue, which I later learned was cataracts. So much beauty in the midst of such harshness. One morning I arrived and was photographing two women walking towards me at dawn, when one of them threw her hands in the air, one of them wielding a machete, and ran towards me screaming, flailing the large knife. I did what I could to remain calm and not wet my pants; this tiny woman was about to kill me. When she got closer I saw it was one of the women who had named me, and she was calling me by my name, saying, “I’m your mother, do you remember me?” Later that day she gave me a beaded bracelet that is the most beautiful beadwork I’ve ever seen, and told me “don’t ever forget us,” as if it were possible to pull these memories from my heart.

When, through Kura, the village heard of my fall in Italy they sent word that the elders had gathered the village under the thorn tree to discuss this. And to pray, I think, though I’ve no idea what form those prayer take. And they sent their healing wishes to me. They also sent this Rungu. I cried to receive it, lying there in the hospital. It sits on my dresser and every day it whispers to me, in the voices of my adopted family in the far north of Kenya, to keep fighting. To never give up. If anyone knows about not giving up, it’s they.