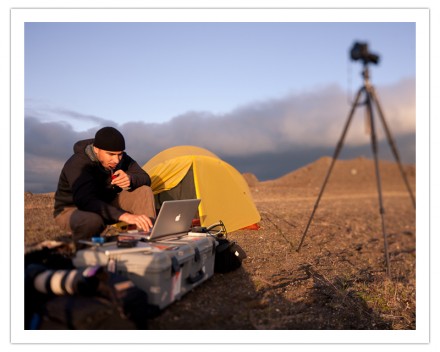 There’s some great discussion going on in the comments of last Friday’s post, Backups Revisited. I think the topic of backups warrants some attention. We talk so much about lenses and tripods and, frankly, spend a lot of money on this art, that it’s insane not to spend some of that protecting our work. I laid out my current backup strategy in pretty simple terms, but there were questions about things I left on the periphery. Here’s some replies to those questions..

Yes, I have all my images in one Lightroom catalog. Over 125,000 of them. This has changed. I once had them in different catalogs for each year, but it was beginning to drive me insane with the need to open and close multiple catalogs for projects that spanned multiple years. All my files, in DNG format, are in one large LR catalog.

When I travel I create a new catalog for the project, then import from catalog when I get home, and run the off-site backups, then do a proper color-managed edit on the big screen.

While unrelated, my rating system is easy. An image is either a 5-star image or it’s not. Sure, I could use flagged as a pick instead, but this is how I do it. I’m just really binary in my decision making. It’s a Hell, Yes!, or a No. Lots of different systems out there, but I don’t think of my photographs relatively. Yes or No. And 5 star, for me, means yes.

My offsite backups get updated either monthly or after a significant project. If I’ve not been shooting or doing serious editing for a month, then no need for the backups. My manager brings the Pelican to the office, we run the backup, he takes it home when he goes.

I left the DROBO system because I was tired of the maintenance, the weird little glitches, and then the last updates gave me issues. It worked well when it worked, but I started getting nervous about the proprietary issues, so decided to go with a more traditional RAID this time.

When I bought my last MacBook Pro, I had the service guy at the shop put in another 750GB drive after taking out the optical drive, which he put into an enclosure so I could use it as a USB optical drive if I needed to. Seemed easy enough. Added a little weight. I use the one drive – a hybrid drive – as my boot drive and it constantly backs up, using Time Machine, to the second drive.

There’s some other good comments in the discussion, including the idea of using a service like Backblaze, which I don’t use, but see the advantage of. What I do use it DropBox for almost all my other files. All my business, writing, blog materials, it all goes on Dropbox so I can access it on every machine, and if one of my machines got stolen or destroyed, I could buy a new one sign into Dropbox and (after some waiting) have access to everything again as if nothing happened. Except my apps, of course, but I could download a trial version of anything important and get me through until I got home. Oh, and I can access that stuff on my iPhone and iPad through the Dropbox app too. The Cloud is magic. It’s like living in the future!

And I’m beginning to print the best work. I print it large and archival. I don’t want to leave a stack of hard drives as my legacy. Now, whatever your backup strategy, take a few minutes to go run your backups. We work so hard to create these images, it would be a shame to lose them to a hardware failure, theft or fire. Remember, it’s not “if,” it’s “when.”