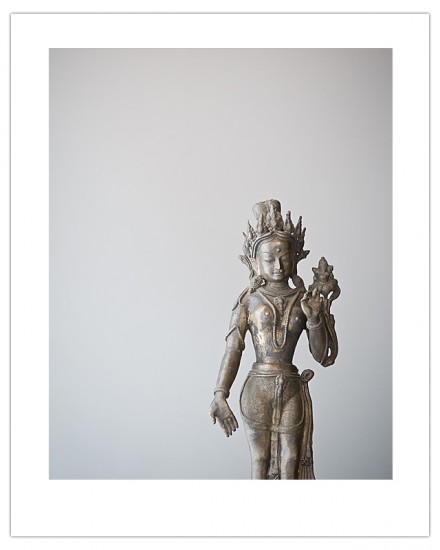 This is Tara, the goddess of compassion. She sits on my dresser in Vancouver, but I found her in a little dusty shop in Kathmandu, and fell in love with her form, serenity and sensual lines. I carefully packaged her up and put her into my duffel and gave her no further thought until she was unceremoniously pulled from her wrappings at the first checkpoint coming into the Kathmandu airport. It wasn’t the first time I’ve had to bribe my way out of a country.

Years before, after spending a Zhivago-esque winter in Russia the year after the wall fell, I was bringing an antique samovar home when the man putting my bag through x-ray told me that while I was free to leave the country, my samovar was a “big problem.” In Russia, he said conspiratorially, “we have 200% duty.” He then took out a small ziploc bag, from which he pulled another ziploc bag, from which he pulled yet another bag, inside of which was a calculator. He did not remove the calculator. Instead he furiously typed random numbers until I was sure he was going to tell me he’d solved Fermat’s last theorem. Instead he told me I owed him $5, looked confused, went back to his calculations, and demanded $50 instead. The transition to a free market economy was not an easy one for Russia. I know this not only because this man was openly defrauding me of my last $50, but because only the day before I’d been part of an attempted mugging, had a razor blade pulled on me, and when I didn’t comply the man stole a painting from a nearby wall tucked it inside his jacket and walked back to me, flashing the painting, and asking me in flawless English and a heavy Russian accent, “You want buy painting?” I didn’t. But back in the St. Petersburg airport I made a donation to the local economy and took my samovar home.

In fact, it wasn’t the first time I’d had to bribe myself out of Nepal. The year previous I was frisked at security and told to remove my wallet. Inside they found Indian 500-Rupee notes, which it turns out are illegal in Nepal. The man explained this to me. I explained to him that in light of this new information I could not possibly leave the money with him.

“If I leave this money with you then you will be in possession of 500-rupee notes, and you and I both know that is illegal in Nepal. You seem nice; I couldn’t possibly do that to you.”

“Well perhaps you could leave just a little of these rupees with me.”

“Well, you see, my boss, he is a very bad man, and if he finds out you have this money, it could be very bad for you. Perhaps you should be leaving it with me.”

“Like I said, I’d love to do that. But as you explained, your boss, he is a very bad man. If he should find out I’ve given you this money, it could go very badly for you.”

On and on it went until I lost my humour and gave him several notes, threw my much-lighter wallet into the plastic bin to be x-rayed, only to have my wallet pulled out, examined and told I could not have Indian 500-rupee notes, and that, (I’m not making this up) “my boss is a very bad man.” I sighed, made a donation to the local economy, and went to catch my flight to Delhi.

So it was with this background that I stood at the entrance to the Kathmandu airport being told Tara could not come with me. We played the game, danced around, and then I finally said the magic words (take note), “Surely, there must be some way we can resolve this. Is there some way you can help me?”

I made another donation to the local economy.