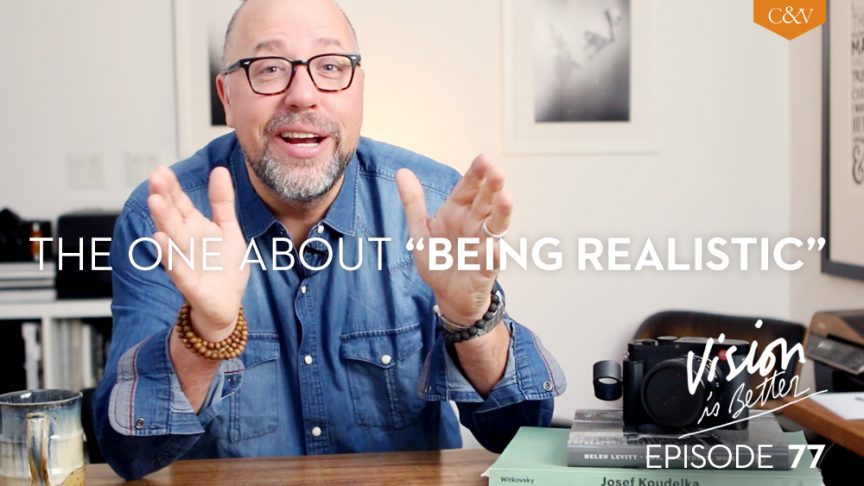 As we roll into 2018 with our usual expectations that this year is going to be different, or better, or the year we take things to the next level or dial things up to 11, or whatever,  there will be no shortage of voices – many of them in your own brain – that are going to try to hold you back, in your photography, your business, your creative life. I have appointed myself to remind you that these voices are scared little chicken-shit voices and they aren’t the only ones out there. In fact, if any of us are going to accomplish the things we’re so optimistically planning and dreaming and making resolutions about, we’re going to need this reminder and the encouragement to dream a little bigger. And to do a little bigger.

If you’d rather watch this on YouTube, it’s Episode 77 of Vision Is Better and you can watch it here.

More of an audio person? You can download or listen to the Mp3 file here:

When I was a teenager I went to Disney’s Epcot Center and there was this ride that still haunts me. Not because it was scary, in fact it was almost hypnotically boring. But there was this narrated voice that kept telling me that if I could dream it I really could do it and for whatever reason I have memories of hearing this voice over and over. I can dream a lot of things that I will never be able to accomplish, so don’t look to me for overly positive affirmations that you can do whatever you set your mind to. We all have our limitations. True, actual, honest to god limitations. You can’t just achieve anything you desire this year as though you were your own genii granting your own wishes. Life doesn’t work like that.

But: life also doesn’t work when we simply accept those limitations and roll over and wait for mediocrity to steam-roll us into boredom and the flattening of our dreams. So because there are going to be enough negative voices and circumstances in your life this year, reminding you that life is hard and dreams are not easily won, let me remind you that the voices telling you you can’t do this or that because it’s not realistic, don’t have the full story.

No one really knows what realistic is.

Johanna Basford is credited with creating the adult colouring book craze and is now worth millions and millions of dollars.

I’m not ridiculing them, just saying no one saw it coming. I’m guessing she had plenty of people in her life looking at her a little funny when she started floating that idea past them for feedback. So the next time you wonder if you can make a living doing dog portraits with a 4×5 film camera, and you start thinking it’s not “realistic” remember that “realistic” is a very fuzzy concept that is more clearly defined by the reality of our actions than anything else.

Remember that at some ludicrous point in time someone thought “Sharknado” was a good idea. And not just once! 2017 saw Sharknado 5, Global Swarming, come into the world.

In 1975 a guy named Gary Dahl joked with his friends that he was going to sell pet rocks and he became a millionaire selling rocks in a box.

Pet. Rocks. And you think you can’t pull off your next creative project or your next business move because it’s a little risky? A little too, outside the box? If its not Sharknado or a pet rock, you’re not even close.

Yes, Pet Rocks and Sharknado and Adult Colour Books are outliers. They’re the extreme, I know that. But unless your idea is even less “realistic” than those, don’t you think you may as well err on the side of optimism and perseverance instead of just giving up now?  Don’t you owe it a shot?

When I coach photographers, whether it’s about creative or business matters, I hear this one thing over and over again, and while it gets expressed in different ways, it’s basically this: If I could do what I wanted to, it would be ___________________, but…and then they list the reasons that they’re giving up before they even try, before they have anything more than their fear and their suspicions to go on.

And they’re really legitimate-sounding reasons. Except they’ve never tried. They really don’t know. They’re guessing. Because they’re afraid. We’re all afraid. Afraid of failure. Afraid of the unknown. Afraid of change. Afraid of the effort, the ridicule. Did we think this would be easy? Is it that we’re all looking for that one idea in the world that’s going to change everything but takes no effort? Cost us nothing?  “Well, I want to do something really cool, but until I know it’s a sure thing…”

Art comes with no guarantees.

Who says you can’t make portraits of people or their dogs with a large format camera, and perhaps make a living doing that? Why not? Have you tried? Have you even tested the waters?

Who says you can’t make a living as a travel photographer who only uses a Polaroid camera? I read an article about a photographer who’s working for major publications with old point and shoot digital cameras most of us wouldn’t think twice about throwing in the recycle bin, and another about journalists using only iPhone cameras. Why not?

Why can’t you be the photographer shooting $20,000 weddings or shooting cover art for Wired magazine with a Fisher Price camera? If I could make a living as a juggler making a couple thousand dollars a show, then you probably haven’t yet scratched the surface on what’s possible.

In fact when other voices might tell you your plans aren’t realistic, that you’re reaching too far – and that’s the fear speaking – there’s a better a chance than not that you’re not reaching far enough, not dreaming big enough.

Let me wrap this up by harnessing a metaphor that may or may not work. It works for me. They say people that fall down and sustain the least amount of injury are the ones who go limp, who just roll with it. When I did Judo as a kid we spent hours and hours learning to fall, to roll with it, and the more comfortable we got with falling the less we feared it, eventually throwing each other around like rag dolls. But in other areas of life we don’t learn to fall, we go rigid at the thought of hitting the ground, especially as we get older and have more to lose,  we fear the harm of falling, and so we never shake the fear. What if the best thing you can do this year is to get less freaked out at the thought of failure? In fact, what if we assumed failure, what if we knew it was coming and welcomed it as part of our process, the part where we learned to make things better, whether that’s art or business? Someone recently flipped this on its head for me and told me “failure isn’t an option for me, it’s a necessity.”

What if we knew our first efforts at some new thing would be ugly failures? What if we relied on those to help us make the better versions?

Writers do this all the time with their shitty first drafts. The purpose of the first draft is not to write a great story. It’s to get writing. To get the bones down, see where it’s strong and where it’s weak. Then you write another draft. And another.

Look, I have no idea what you’re planning for this year. But if it’s going to be great, and you live in the same world I do, there’s a good chance it’ll be crap when you start. But if you fear the crap you’ll never even get that far. Lean into it. Relax. Loosen up. Assume failure, don’t fear it. And then? Dream big. No one else is going to do it for you. And yeah, you might aim for the stars and fall a little bit short but you’re still going to go so much farther than the guy who’s too scared to look up.

There are things enough to fear in this life, things with real teeth, so while you can: do the things you’re excited to do, whether or not you have any guarantee of success. Go all in on it, and don’t worry about getting knocked down, of bruising your pride or screwing it up the first try. Count on the failures, don’t fear them – they’re your best shot.

Have a wonderful holiday, however you celebrate it. On New Year’s Eve I’ll be flying back to Ethiopia and I’ll be in east Africa for a month. I’ll see you when I get back. Until then, remember gear is good, vision is better, and if adult colouring books can make someone rich then, my friends, we’re living in crazy times when anything is possible.