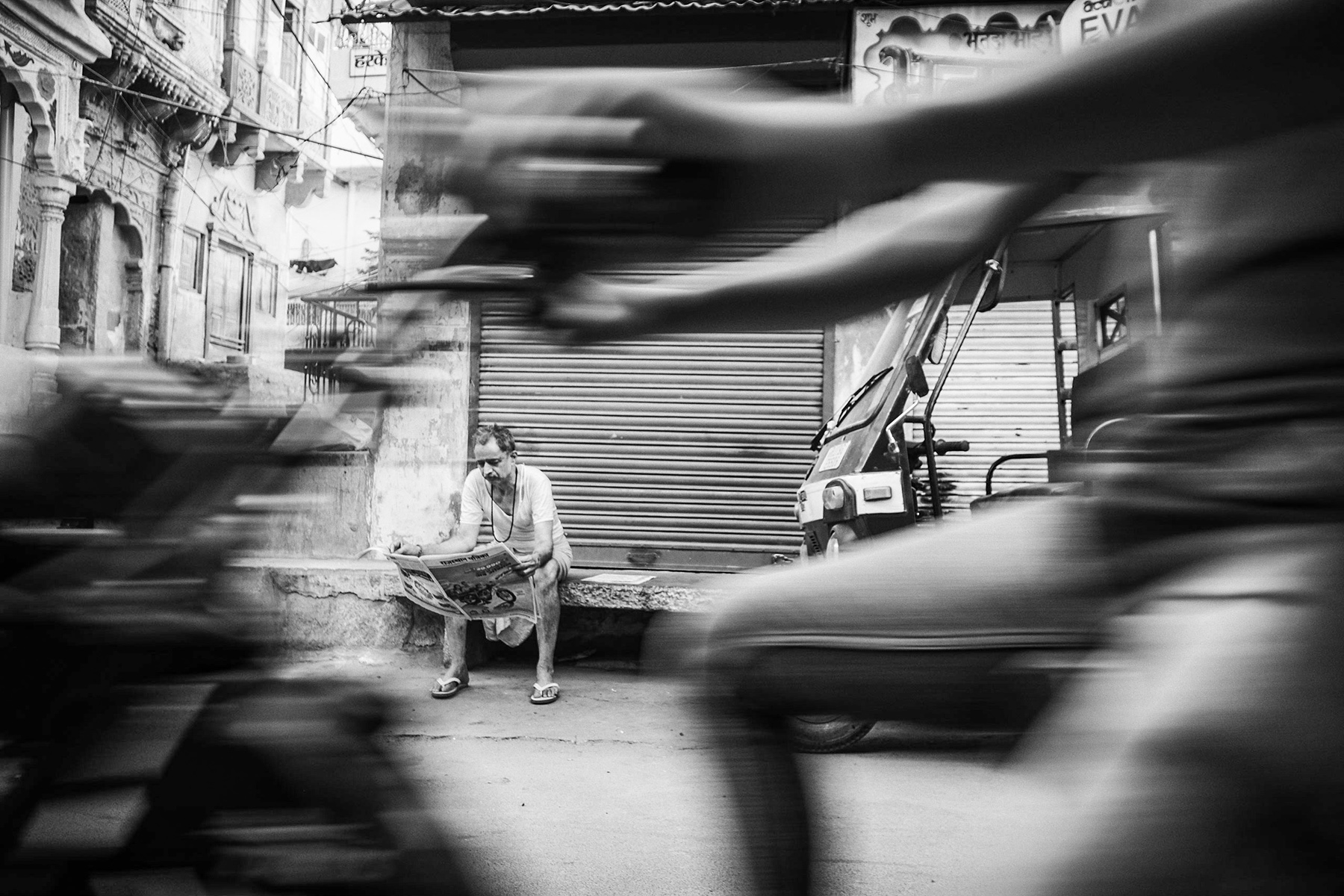 I want you to imagine you’re sitting down with me, looking at a photograph, and I’m explaining what I was thinking when I made it. If it helps, imagine it’s the photograph I showed you a couple of weeks ago in the video of the man making coffee in Istanbul. And now that enrollment for the course I recently launched is closed, imagine you’re no longer worried I’m going to try to sell you something. We’re relaxed and talking, and I tell you what I was trying to accomplish and why I chose a certain focal length, point of view, aperture, shutter speed, and so on. I might mention the importance of composition. If your eyes haven’t glazed over yet, I might talk about the moment I chose to support the story I was trying to tell.

Nice, right? Just the two of us. There’s probably a cup of coffee or a glass of wine. And if you’re interested, I’ll show you another one, perhaps from a recent safari in Kenya. Just give me a chance and I’ll talk your ear off. The light. The settings. The big lenses. The fight for a great point of view and a powerful moment. I’ll be doing this while feeling like the luckiest man in the world. And you? There’s a good chance you’ll be thinking there’s just no way.

There’s no way you can be thinking about all of these things, fussing over composition, making choices about storytelling, light, and all the other things. Not in 1/60 of a second. You might even call my bluff. “No way,” you say.

And that will be my cue to pour you another glass of wine and reply: yes way.

At the beginning of learning this craft (which for me took a very long 15 years, at least), it seems like there’s just too much going on, too many considerations. And you’re meant to get the exposure right—never mind being creative with it—and composition and focus and, dammit, did I just shoot that at 1/2 second?

I get it. I do. A couple of weeks ago, I received a few emails from readers saying basically the same thing: “I shoot street photography, so there is no way I can think about all this stuff. I’ll lose the moment.” The same emails come from inexperienced wildlife photographers. And wedding photographers.

Some days it feels like everyone, except the landscape photographer who’s chained to his tripod, has the same excuse for not being mindful about their choices and for their photographs lacking the magic they might otherwise have.

So to them, I say: you’re right. At the beginning, and often years into this, you can’t think about it all in that moment. And yet that moment is so crucial, and capturing it well is what makes the photograph so powerful. Yes, it feels impossible. But don’t give up. It can still be done. And you don’t have to be born with a rare (mythical) ability to “shoot intuitively.”

But when you say, “no way,” you’re also wrong. There is a way. There are probably several ways, all of them some version of this: you don’t need to speed up; you need to slow down.

No one loves to hear this, but when you begin, it takes you a while to master the basics. It just does. But the more you master them without getting distracted by other things, the easier it is to make faster decisions because you’ve done it a million times and the camera feels like an extension of your hands. It helps greatly if you’re not changing your gear every year. The reason seasoned photographers can think about the finer points of composition while photographing a quickly-moving scene on the street, at a wedding, or on the sports field is because they’ve done some version of this many times before and they’ve mucked it up almost as many times; their time spent in mastering not only their tools but their contexts are only now paying dividends.

If you’re having a tough time thinking about composition or the choice of moment, story, depth, energy, or any of the other things that make a great photograph at a wedding or out on the savannah, it might be because you’ve not yet shot enough weddings or spent enough time on the savannah.

That doesn’t make composition less important, and it doesn’t make it impossible. It just means you’ve not paid your dues—yet. But you will.

It’ll come, but don’t you dare settle for mediocre just because it’s hard for now.

Keep going. Pay attention. Which moments keep happening over and over? What are the signs that these moments are about to happen? What possibilities do you see? This is a strong argument for focusing your work a little. The photographer who mostly documents families for five years is going to anticipate, see, and capture moments others won’t—not because she has a faster eye or shutter finger, but because she’s more familiar with her context.

It’s easy to look at a great photograph, one that really moves you, and to think it’s a lucky shot. Especially when the moment is so important. How fast did that photographer have to be to get that shot? Holy moly. But that’s not usually how it works.

Many, if not most, of the best street photographers (as only one example) find an interesting place and wait, making frame after frame as interesting moments happen. Wildlife photographers do this, too. They shoot and shoot and shoot. And then they agonize over choices of moments in the edit. And you think it’s magic because you see that one polished, carefully chosen shot that represents only 1/250 of a second from a scene that was explored for 10, 20, or 30 minutes or more. And while the photographer was waiting, they were anticipating different moments, tweaking their compositions, changing their minds about what they were going to do with the light, and sometimes, finally seeing the scene in a whole new way before finally getting that “magic” moment. It might be a decisive moment, but it only happened after many indecisive ones.

Don’t let the final image fool you; it probably wasn’t made by an intuitive photographer with lightning-fast reflexes, but by a patient photographer willing to put in the time.

I mentioned it in passing, but let’s talk about editing for a moment. Editing (link to Make the Edit easier) is not the tweaking we do in Lightroom, CaptureOne, or whichever software you prefer. Editing is choosing one image from many, and it’s as important creatively as the choices you make in-camera and the choices you make in so-called post-production. If, for every strong image I choose from a shoot, there are 100 images that don’t make the cut, it becomes easier to accept that I’ve actually got plenty of time for all these impossible decisions.

It is a mistake to believe that when a more experienced photographer talks about thinking 30 different things to get a photograph, and you know you can’t yet do this, that it means you won’t one day be able to.

The easy thing to do is say it’s not realistic, that moments happen too fast, that composition can’t possibly apply to street photography, or some other context in which things happen fast, which, last time I looked, is really most of life (except, again, for that landscape photographer sitting with his tripod in the rain—then time becomes impossibly slow)

It’s easy to say you’re just not an “instinctive shooter,” but instinct is trained.

You’ll get there, though not if you deny the need for the very things for which you need to develop your skills.

It’s easy to say the moments happen too fast, but that’s not usually the case if you slow down and spend more time. Sure, if you walk through the woods and a bear runs past you, there’s not much chance you’ll catch it with the camera. But if you were already there and waiting when the bear went past, you’d have heard it coming. You’d have been ready. You’d have considered your framing long before it got there, even if it was running. Perhaps it’s time to be less reactive and to slow down and spend the time.

Sometimes the hardest work in photography is waiting for the bear, metaphorically speaking.

It’s easy to say it’s a lucky shot (aren’t they all?), but when you slow down, spend more time, and shoot more frames and then allow the edit to become an important part of the creative process, you start to see how much room there is to choose one moment over another with time to spare and not to rush it, all because you were generous with your willingness to fill the memory card or risk making a bunch of sketch images at the time

There is no excuse for not composing intentionally, for disregarding the visual language, not being mindful, and taking your time.

“It’s hard” isn’t an excuse. It’s a reason to work even harder to get comfortable with your craft, your contexts, your editing. And it’s the reason we get such a thrill when it all comes together. Because we know it’s so much more than pressing a button, so much more than merely capturing

One of the wonderful things about this craft is that there is infinite room for growth, no matter how long you’ve been doing it—unless you let the excuses get in the way.

Slow down, my friend. Be patient with yourself and your growth as a photographer. Speed is not everything. But composition and choice of moment and the story you’re trying to tell? They are.

I’d love to hear from you in the comments if you’ve got thoughts or questions about this. As I step away from social media this blog is increasingly the place to interact with me.