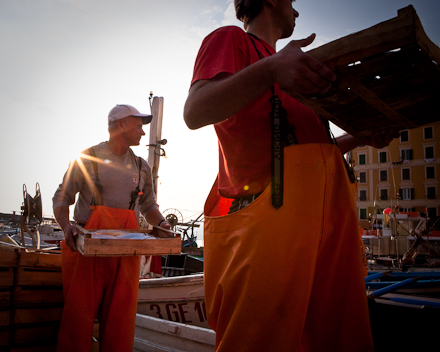 Camogli, Italy. It’s a stretch to make this image relevant to the sermon below, but these guys know that talking about fishing isn’t going to bring the fish in. Neither is looking at the boat and hoping something happens.

Goethe is frequently quoted as saying:

Whatever you can do or dream you can, begin it.
Boldness has genius, power and magic in it!

It’s likely he never said it quite this way, but the quote holds, and is relevant to this post. I’ve been reading a couple books lately. The first is ReWork, by Jason Fried. The second is Making Ideas Happen by Scott Belsky. Both intersect at the idea of work. In fact, a third book – The 4-Hour WorkWeek, Timothy Ferris – intersects here as well. Belsky especially is relevant to what we do, whether we do it as working photographers or not. I tell you all that so you know my sources as I get up on my soapbox.

As the so-called Creative Class you and I put a lot of stock in the value of ideas. Inspiration. Creativity. We often do not put a lot of stock into work. In fact work is often set up as the opposite of artistic endeavors. Where Belsky rocked my world is in pointing out that how great your idea is means almost nothing without the will to carry it out. And to do that you need motivation and organization and perseverance and the willingness to get up at 5am if that’s what it takes (don’t look at me, pretty sure my muse wouldn’t ask me to do that. That’s crazy talk. But for some people…).

You can generate idea after idea, fill your Moleskine notebooks so jam-packed with great ideas the world would fall down at your feet if only they knew how creative you were. But the trap lies in thinking that coming up with the ideas is where the value is. It isn’t. The value lies in your ability to execute. Forget all the hundreds of ideas. Pick one. And do it. Then pick another, and do it too.

We get paralyzed sometimes by too many options. A million ideas and we’re stuck because we can’t pick one. Stop it. Pick one. Move forward.

How does this apply? For working photographers or those who aspire to it – pick one project and do it. Finish it. Then do another. Which one? Who cares! Pick the one you most want to do, the one your dog wants you to do, or the one on the top of the list. But pick one, and do it. Because picking the “wrong one” and getting it done puts you in motion and is better than doing nothing at all. It’s the same with your day to day tasks. I know, you’ve got too much to do. Lord knows my calendars and to-do lists have never been so long, so I feel your pain. Don’t stare at it, don’t whine. Just pick the thing at the top of the list – or better – the one you most dread doing, and begin. Just begin.

And for the ones who just do this for fun – same thing. Begin. Pick a project. Begin. Work it through. Then finish it. Nothing helps us move forward like momentum; beginning is the hardest part. Get in motion, and watch things begin to fall into place.

You are not creative until you actually create something. The root word itself requires that. That old adage about creativity being 10% inspiration and 90% perspiration? It’s true. Don’t let your piles of notes and your great-sounding ideas lull you into thinking you’re making progress. You make progress when you begin. Ideas are great, but they’re no substitute for the thrill of creation, of seeing that idea become real. All you need to do is begin. And then finish. But beginning is the hard part. There are a million excuses – we’re too busy is the best one. But isn’t it interesting how the Too-Busy still have time for Lost and American Idol? How they’re always talking about their next great idea? How they – and by “they” I mean “we” because I’m the first one that needs to hear this sermon – are always talking about photography more than they are actually making photographs. Watch TV if you like, just don’t complain you don’t have enough time. And don’t try that “but I watch TV to get inspired!” line with me, most of us don’t need more inspiration. We need to begin acting on the inspiration we’ve already been given.

Timothy Ferris is a good read on this. The first thing he suggests is to adopt a low-information diet. Fried says decision are progress: stop thinking about projects, make a decision and move forward. Belsky suggests you adopt a life with a strong bias towards action. I suggest the same thing when you get stalled. Stop thinking about it. Stop complaining about it. Just begin. I’m not sure there’s magic in it, but power certainly. You will get more done than most creatives by taking that first step.

I know this post doesn’t seem photographically relevant but the fact is most of us have enough technical knowledge and at least one good idea. What we need is to get moving. Heck, even a mediocre idea – even a BAD idea – once in motion is better than a good one that never finds legs. At least the bad idea in motion has a chance of becoming a better idea and one day actually becoming something more than an idea. Begin!