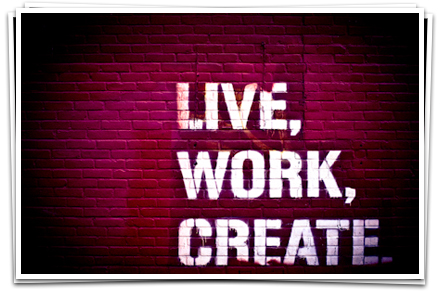 NYC, 2010. The outside wall of a Brooklyn Clothing store.

I’m in Iceland right now, so this one was auto-posted. See y’all when I get home. I hope to get time to send a postcard, but don’t hold your breath. The tent doesn’t have wifi.

I had to laugh today when I got yet another couple of comments and emails asking how I get so much done. Caffeine? Red Bull IV Drip? No sleep? Secrets gleaned while in Bhutan? I’ve never been to Bhutan, so that can’t be it.

It’s true, I do seem to get a lot done. But then I’m single. I have no children. My play and my work are the same thing. And this is what I do for a living. So before you get down on yourself for being less productive, remember that I’ve also got fewer things pulling me in other directions. I can’t imagine doing what I do if my context were different. I’d slow down considerably if there were other factors. And one day there will be and I’ll just get less of these things done in favour of other things. And that’s OK. But I believe life is short and we get meaning from our work (among other things), so I work hard at the things I love. I think I also work smart and in 20 years of making a living as a self-employed creative, I’ve learned a thing or two about making ideas happen and getting things done.

This isn’t a photographic post but it relates to getting things done, and that’s relevant for everyone who’s ever had an idea begging to be made real, begging to be created. So here’s a few thoughts about productivity.

1. Prioritize. Know what matters and what does not. We get so distracted by things that do not matter, we spend hours chasing our tails. Don’t be afraid to say No. In fact, learn to make No your first reaction, then change it to Yes if the thing you’re debating fits into your priorities. If you don’t know your priorities then this is much harder, so that’s where you need to start. Write it down. “This week/today my top 3 priorities are _____________________” The rest has to wait. Put an hour aside at the end of the day for doing non-priority stuff so it doesn’t pile up, but do first things first.

2. Know How You Work. Don’t try to put a square peg in a round hole. If you need to go to a coffee shop to work, do it. If you need to listen to music, do it. Whatever makes it easier for you to be productive – get comfortable with it. Some of us work better in 2-hour chunks in the early morning every day, others need a couple late nights a week. Not everyone is productive in an 8-hour stretch at a desk. If it ain’t working for you, don’t do it. And when you find what does work for you, make it happen. I work best at a coffee shop with Van Morrison, so each morning I get on my Vespa and go to the “office.” Most days I get more done there in 2 hours than I’d get done sitting in my home office in 6 hours.

3. Find Balance. I know, I stink at this. But when people I assume I get no sleep they couldn’t be more wrong. I almost always get 8 hours of sleep. Heck, I often take naps in the middle of the day. Exhausted people are not productive, lucid, healthy, or creative people most of the time. I know some of you think you’re functioning really well on 5 hours, but I’d be willing to bet you’d do better on 8. I know, some of you can’t, in which case you need to work even smarter. But I’m sticking by this – I think rested people get more done. So do people who eat well, take time for themselves, and spend time with the ones they love.

4. Kill the distractions. If you don’t have enough time in the day, stop watching TV. Reduce the number of blogs you read. Stop reading the papers and the magazines. Go on the low-information diet that Timothy Ferris recommends in The 4-Hour WorkWeek. Try it for a week and see if it doesn’t free up your time and attention.

5. Batch your Tasks. If you check Twitter for 5 minutes every half hour that’s not only a tonne of Twitter time, it’s also a loss of the time it takes to wind down and ramp back up on the tasks you should be doing instead. Multi-tasking is not the best use of most people’s time. We just aren’t wired to do a million things well. And if, like the sleep thing, you think you are functioning really well as a chronic multi-tasker I still suspect you’d do even better if you increased the period of time over which you focused on singular tasks. Look at the things you do often in the day and see if you can do them less frequently. Do it for 30 minutes at the end of the day instead of 5 minutes each hour for 6 hours. Same amount of time, but more concentrated attention on that activity, as well as on the other tasks from which that activity distracted you.

6. Do The Thing You Fear. If the worse thing you have to do today is kiss a frog then do it first. Get it over with. Often the thing we most fear is the thing that has some of the highest benefits for us, and fearing it distracts us from other things. Suck it up. Take a deep breath. Do it. Move on.

7. Make A CheckList. Write it down. Put a checkbox next to it. When it’s done, check it off. Look back over that list at the end of the day, as well as the end of the week, even the end of the month. Much harder to let tasks slide by when they are written down and the empty checkbox is taunting you.

8. Break It Down. If the thing you have to do is so large and intimidating that you just can’t seem to start in on it, break it down. Don’t eat the whole salami, just eat it slice by slice. Instead of putting Write Book on your checklist, break it down into pieces and begin with Brainstorm topics for book. Outline Book. Spend 2 hours writing Introduction. Small bite-sized pieces allow you to get moving, steer a moving ship, and begin to make some progress – momentum is hugely motivating and before you know it you’ll be half-way through a list of small tasks instead of still staring down one large one.

9. Find The Empty Spaces. I need 30 to 60 minutes to do solid work. 2 hours is best. But when those larger slots get eaten up with lots of little details, they stop being useful. So I do the smaller tasks when I can’t do the larger ones. I bring my laptop to the doctor’s office and clear off some emails in the 15 minutes I wait. I take my iPad on the bus or in a cab and I catch up on blogs or reading articles I haven’t had a chance to read. I find spaces in my day to get the smaller tasks done in order to keep larger slots open. It’s the “Put the big rocks in first” approach. Fill the little spaces with little tasks so there is always room for the big tasks in the big spaces. I know, seems simple, but it’s amazing how often we let those little moments get past us, and then we get a free afternoon and drown in a sea of little things we could have taken care of here and there. I use time on planes and in hotels and airport lounges to get things done instead of just sitting and staring at my watch. Sitting waiting for your son to come out of hockey practice? Don’t freak out because he’s late, do something with that unexpected 15 minutes. Read something. Reply to an email. Call a friend you’ve been meaning to call. One task accomplished and less stress when staring down the bigger things, just don’t “kill time.” Never, ever kill time.

These are just some of the tactics that work for me, but driving them all is one thought that I think is most important: Redeem your time. Time is not money. To even compare the two trivializes our most limited, non-renewable resource. Time is far, far, more valuable. Life is very short; once it’s over it’s over. That knowledge is what makes it easy to prioritize, makes it easy to say no to the unimportant, and to work hard in the time that I have. Because the better I can manage this stuff the more time I have to do the things that are most important to me – time with friends, time to travel, to write, to create, to make a difference. I only have, what? 50 years left in which to do it all (if I am really, really lucky) – and while that 50 years may seem like an eternity now, in hindsight it will feel like a vapour, a breath. That perspective makes it much easier, for me, to make the most of the time I have now. Because my bucket list is long, my loved ones are many, my best work is still waiting, and my days are only getting shorter.