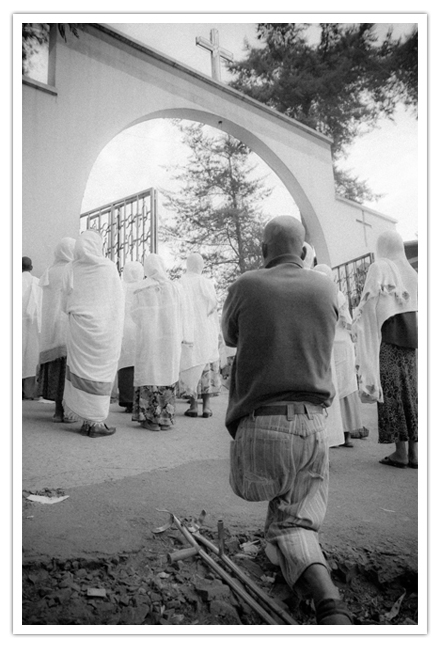 I saw this man in Ethiopia 4 years ago. Kneeling on one leg, missing the other, letting nothing stand in the way of doing what he was there to do. Not the strongest photograph I’ve ever made, but man do I like this guy’s style.

I can’t begin to properly tell you how my time in physical rehab is affecting me, but I’d like to try. Every day I am surrounded by nurses, physiotherapists, and a crew of misfits missing limbs, learning to walk or perform basic tasks again. Each day I walk laps in the gym, beside others, all wrestling with a piece of the puzzle, something standing between who they once were and who they are becoming. Some are having prosthetic legs fitted, some are taking dizzying first steps, others are doing things with two prosthetic legs that I struggled to do even before my accident. Everyone cheers each other on. Everyone stops to smile or talk. Everyone faces what they can not do with a disarming (forgive the pun) degree of humour, knowing if they don’t laugh the only alternative is tears, and they’re honest about those too. No one here is “all that and a bag of chips.” No one here is a “pro” and there are no “amateurs”. There is no fixation on gear anymore than for the purposes of finding what works. Some use chairs, some use crutches, some canes or $60,000 prosthetics. There are no camps. Everyone I have met cares about one thing. They want to walk.

So we show up every day and do the work. For some that’s calf exercises, or ankle mobilizations, for others it’s repeating one step over and over until the mechanics become muscle memories and stick. No one here does it because they love rehab. They do it because they just want to walk.

My PT keeps asking me if I want to walk the gym. She’s not really asking but likes to let me pretend I have a choice. I keep telling her I won’t learn to walk by not walking. So I walk it. Over and over again. Last week my goal was to walk a kilometer. I walked it, and then some. A couple times. There are guys here that could do twice as much in half the time. Others who would give anything to walk as well as I now do. But they don’t compare, they do the work. And they celebrate hard when they get there. And then they move on to the next goal. They don’t sit on their laurels, though if anyone ever deserved to, it’s them

I find myself wishing we all, including myself, approached photography, maybe life even, with as much grace; wishing we could find a place where there were no comparisons, no gear addictions. Where nothing matters but the people and the photographs, where we cheer each other on in their victories and encourage them in their struggles. Where the gear is nothing but a prosthetic limb we endure as much as it accomplishes its purpose. Where comparisons and bragging and all the ego-drivel is irrelevant and seen for what it is – wasted energy that might otherwise be spent on making art. Can you imagine the art we might make if we were more concerned about being ourselves and doing the work we alone have been given, if we showed up and just made photographs, day after day, without regard for the brand names on our cameras or who said what about our photographs on Flickr or 500px?

I’m really not going anywhere with this; I just wish you could be here in this amazing place with me. Hard? Yes. Struggles? Absolutely. I don’t mean at all to paint rehab with a romantic brush. It’s sweat and hurt and everyone there came to it honestly – through pain and calamity. Some from roadside explosives in Afghanistan, some on motorcycles, others through the betrayal of their own body. Life has rubbed them hard, but you should see them shine.

Some details on other things, for the curious. I’m about to begin week 3 in rehab and have a hard push to the end because they boot my ass to the curb on Sept 01. Next weekend my father and I are driving down to Jeffrey Chapman’s place in upstate NY to pick up Jessie, brought all the way from Atlanta on a flatbed by Vasily Lantukh, for which I am very grateful, and oh am I looking forward to having the pieces of my life reunited. On September 07 I fly to Cambodia and Laos for the first trip since the accident. After the adventure in Laos and Angkor I’m sitting on a beach in Thailand for a week before coming home to tinker with Jessie and get ready for trips to Oaxaca, Roatan, Antarctica, and Africa. And in there somewhere I’ve got one more surgery to fine-tune my ankle. So excited to get back to traveling, but oh my gosh is it about to get busy!