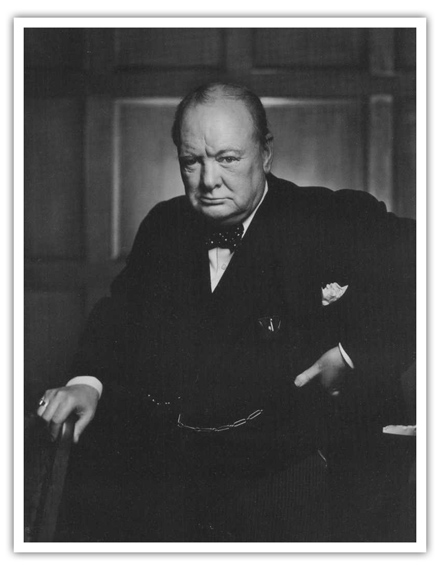 Winston Churchill, by Yousuf Karsh. I love his determination and defiance.

The Rehab Centre in Ottawa, in which I am currently imprisoned – I mean, ahem, a resident – has hanging on its walls an amazing collection of large prints by Yousuf Karsh. Karsh has long been one of my favourite photographers, and his influence was one of those that pushed me to do now what I do. I’ve now been here a full week, minus the weekend which I spent at the cottage on Haliburton Lake listening to loons. I’m up and down these halls several times daily surrounded by well-known portraits of people who’ve changed the world – Winston Churchill scowling down at me, the pensive – almost prayerful- look of Albert Schweitzer, and others. I eat breakfast with Pablo Picasso staring at me, the Spaniard’s gaze almost daring me to make art of my recovery and to do it boldly. On the wall of my room, which I share with 3 other men (all of whom are in bed before 9) there is a white board. “My Goals Today…” it says, and on which I’ve written, “Same as everyday: Conquer the world.” The nurses laugh, think I’m kidding.

Rehab’s going well. My discharge date is September 01 and my PT says I’m way ahead of the game already. Last week I walked over half a kilometer, crutches hanging somewhat loose at my side. This week I’m gunning for the same goal, but with my cane. I get beat up for almost 4 hours a day, reminded by friends, like my buddy Anita, that pain is temporary, but quitting lasts forever. Every day is one step forward.

So it is with all of us. Or it could be. Most everyone that reads this blog wants to move forward in their art of their career as artists. We often think big: In 5 years I want to…. But in the rush of day to day living whole weeks pass by without taking a single step towards that goal. In rehab they don’t just teach you to walk by making you walk. They break it down into steps. I’ve spent hours now doing heel raises and ankle rotations. Stepping forward, stepping back. Up one stair, down one stair. The question on my white board is more relevant than my seemingly sarcastic comment about conquering the world might imply. If you want to be a full-time artist in 5 years, what are you doing now – today – to get there. Don’t reply with “getting new gear.” If you aren’t learning to edit now, you won’t magically be able to edit later. If you aren’t taking time to shoot now, your portfolio won’t magically appear in one year or four. Whatever you’re burning to do – start now, break it down, and get on it. The days add up and the small steps become a half kilometer before you know it. But you can’t sit on your ass and just one day be able to walk that 500 meters. Start today.

I gotta run. My beating is about to start.