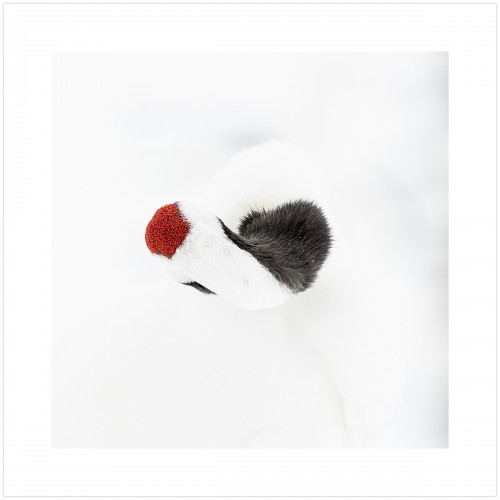 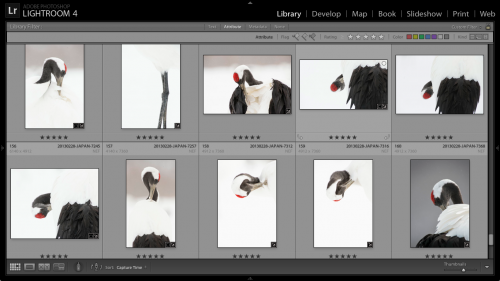 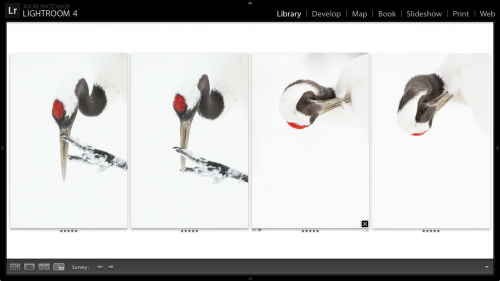 Coming home from Hokkaido with 8000 images to edit should seem intimidating, but it isn’t. I got a couple requests from people to share my editing process, which hadn’t even occurred to me until I got them, because I’m pretty much done already. So then I went and told Twitter and Facebook I’d show people how I do this painlessly and I’m worried people are going to read this looking for a magic bullet. So, here are my caveats: This is how I do it. For me it’s painless. By editing I mean the process of choosing images, not processing them. And finally, the software doesn’t make a spot of difference – use what works for you. Hell, use contact sheets and a red marker, if you want. It’s the photographs that matter, not which tool you use to get there.

1. Field Edit.
When I say I had 8000 images, understand that I was shooting on high-speed burst. Way too many frames of monkeys, but the snow was falling hard and I wanted the best chance at useable frames without a snowflake over an eye or something. Same with the birds, all of which move fast. The eagles were incredibly hard at times, and one morning I shot 1000 images, all panning with slow shutter speeds, knowing my failure rate would be through the roof. My usual practice is to shoot fewer frames and be more selective in-camera. But daily I do a field edit. Very rarely do I let a day go by without doing this. Let it slide and it begins to backlog. If it’s an assignment, then this is the stage I do captioning and add notes about model releases. I do it this way:

2. Home Edit.
A small 11″ MacBook Air can only show so much. By the time I get home I’ve got a roughly edited body of work that I immediately export to my main computer, a 27″ iMac. I don’t wait. I can do everything else, including sleep, unpacking, and laundry, while files are being ingested. Then:

3. 6-Month Edit.
I’ll come back to this work. I always do. I let the best rise to the top immediately, and let the rest sit. New images show themselves with time, while that same time shows me weakness in images I initially thought stronger. Printing that work helps with this too. After living with those prints for a few months, even a year, I’ll pull some from my collection, replace them with others.  I’ll often do a 1 or 2 year Edit as well, for the same reasons. A little distance helps you see things differently, often more clearly.

I think the most important part of the edit for me is in not allowing myself the luxury of the angst-filled second-guessing. I know photographers who lose sleep over picking images. Is it strong? Isn’t it? Is it a 3-star or a 4-star? I admit that my own tastes and ability to know which images are strongest to me is something I’ve acquired over 25 years, but listen, if you love the image, make it a pick (Love it, don’t just pick it because you need 12 mediocre shots. Love it!). You can un-pick it later. This isn’t Sophie’s Choice. If you don’t like an image, let it lie, you can change your mind later during the 6-month edit. What is most important is that you know what you like. If sharpness is the be-all/end-all for you, then allow that to guide you. I’m not sure most people are moved first by how sharp an image is, and I’m not either, so I go with composition and gesture first, which is why I use the small thumbails. I can see little else except the lines, shapes, balance, tension, and colour. The rest doesn’t matter. Don’t let this process grind you down.

It’s important to remember that any task will fill the time you’ve budgeted for it, and if you’ve budgeted to just “edit until I am finished,” then you’ll be going for weeks. Give yourself tight time limits. Work within that constraint. You’ll begin to get a little more ruthless and that’s a good thing. Photographers can afford to have fewer delusions about their work. To misquote Hemingway, “photograph drunk, but edit sober.” Anyways, this is my way, it doesn’t have to be your way, but if any of this is helpful, run with it.

For more, I’ve written an articles on The Art of the Edit, and Missing The Shot / Capturing the Moment, in the first two issues of PHOTOGRAPH which I publish, adore, and am happy to shamelessly promote. You can see them here at Craft & Vision.