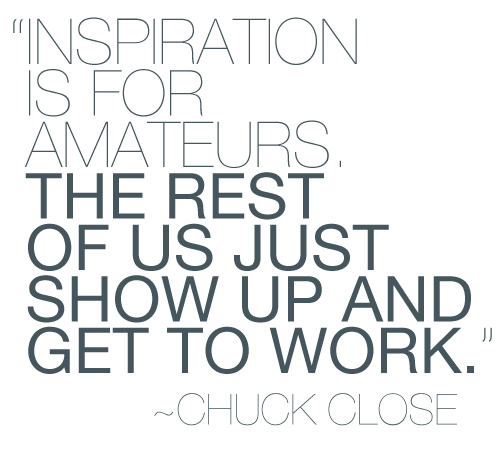 For a craft that is, at its heart, a creative effort, it amazes me that you’d have to read 100 books about making better photographs before you read anything on the creative process. And it’s not that it’s the job of these educators to teach creativity, but still. I’m sitting in a coffee shop right now, two photographers beside me. They’ve been here for an hour talking about making better photographs and the conversation hasn’t yet moved past a discussion of Tamron lenses. I’ll wait all day before they talk about the important stuff.

The truth is, I don’t want to be first a photographer. I want to be a creator. If that means I use a camera, great. If it means I use words, instead, just as good. I want to point at beauty and make experiences. Not everyone’s like that. But if creating is what you want, if you to BE more creative, here’s 5 things I’ve noticed about truly creative people. And by creative I don’t mean they’re artsy or original, just that they consistently create.

They See Possibilities.
Creative people are constantly asking What If? They work with challenges constantly and don’t focus on them, they focus on the potential outcomes. They’re positive and not easily put off by failure. They resonate with the words of Buckminster Fuller: “There is no such thing as a failed experiment, only experiments with unexpected outcomes.” They understand that creation is a process, not a product, and that mistakes are some of the best tools for learning lessons and finding new directions.

Want to be more creative? Make more mistakes and see them as part of the process, not a failure of the process. You can not create without risk.

They Ingest Everything.
Steve Jobs said creativity was really just a matter of connecting dots that haven’t been connected before. Truly creative people know that the brain will only connect dots that it is aware of. So they collect a lot of dots, from a lot of different places. They read deeply, and as widely as possible. They’re curious, knowing that the most original, and unexpected solutions to problems, will come from connections that brain makes between unexpected sources. So they collect those sources. Einstein was quoted as saying he had no special genius only passionate curiosity. Part of this is spending time with other creative people outside our usual circles. Photographers would be better artists if they spent less time with other photographers, and more time talking to painters and poets and authors.

Want to be more creative? Read up on topics other than photography, go see a play, take a life drawing class, do something that increases your inputs in an area seemingly unrelated to photography.

They Incubate.
Ideas don’t come out of the blue. They come as result of collecting a great many inputs, and letting them stew together. Inputs + Time. You have to give things a chance, and that means thinking about other things. Go play guitar. Go for a walk. Learn something new. Write a poem. Fingerpaint. Get a massage.

Corner a comedian and tell him to “say something funny,” and he’ll get really quiet and awkward. Your brain will do the same when you demand it just come up with a great idea out of the blue. Creative people know that time napping is not time wasted.

Want to be more creative? Make sure you get down-time. Hang the hammock and take a nap. Don’t rush the process.

They Ship.
You can come up with a million great ideas, but unless you make them happen, you miss the chance to put them into the real world and see them evolve and become their truest potential. Ideators are not the same as creators. The brain’s a great place for initiating an idea, but it can’t stay there. Scott Belsky, using words I’ve taken as a personal mantra, calls it living a life with a “strong bias toward action.” Creative people hear as many, if not more, voices telling them their ideas won’t work. They see as many, if not more, distractions as others do. They know if they don’t act, and make it happen, it never will. They don’t fool themselves into thinking their work is done once “they’ve had a great idea.” Having ideas is not the work of creative people, it’s just the to-do list.

Want to be more creative? Take action on ideas immediately. You don’t have to pull it all off today, but take the first step. Make work prints for that exhibit you’re dreaming of. Book the models or the studio for that shoot. Take your first steps the same day you decide to you want to play with this idea.

They Know Quantity Matters.
I’ve read of a couple studies now that directly link quantity with quality in the lives of creative people. Not that quantity is the point, nor that a lot of ideas is the same as good ideas, but people that consistently create have the luxury of getting the bad ideas out of the way, moving more quickly past the projects that don’t work, and into those rarer projects that do work much more often. In Art and Fear, by David Bayles and Ted Orland, there’s a great story about a teacher who told half his ceramics class to make one great piece, and the other half to make as many pieces as they could. The half of the class that created quantity was also the half of the class in which was found the best of the work. The best writers write often, usually every day. The strongest photographers have their first 10,000 frames long behind them. The path to mastery, and greater creativity, doesn’t come without volume anymore than learning a language comes without using the same words over and over again, getting mistakes out of the way, until they become natural. Quantity is not quality, but it heads in that direction.

Want to be more creative? Make more photographs. Stop talking about photography and go make photographs. Creation lies in the doing, not the talking.

How To Think Like Leonardo DaVinci, Michael J. Gelb. My thanks to my friend Jeff Kennedy for giving this book to me. Highly recommended.

The Inspired Eye Series – I wrote these, so I’m partial to them, but these three eBooks, available in a bundle for only $12, talk about the creative process, specific to photographers, and will give you some strong direction as you hone your own creativity.

TED Talks  – Great stuff in here. Pick one a day, at random and see what you can’t learn.