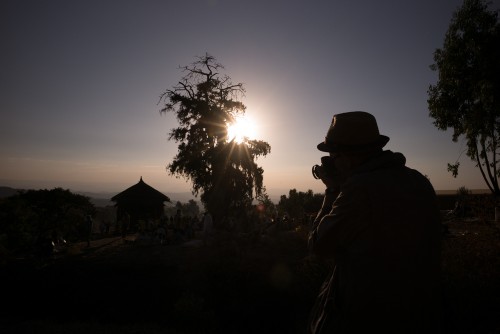 In my last posts I talked about my reactions to working with both my Fuji XE-1 and Leica M, and I mentioned zone focusing. For those for whom the idea of zone focusing is new I wanted to explain it a little. It’s an old technique but it’s simple and reliable.

My biggest concern with Leica, and the Fuji when using a manual focus lens (which it does beautifully with Leica M-mount, or Zeiss, lenses and an adaptor), is the speed at which I want to focus. Sometimes the Fuji isn’t as responsive as I’d like even when using autofocus. But zone focusing – as long as you’re not after really shallow depth of field (DOF), and you don’t mind using the lenses past their absolute sharpest point, can be faster than any SLR. You just compose and press the shutter. No focus hunting, no cussing at the camera. It’s why we’ve repeated the mantra, “f/8 and be there” for so many years. At f/8 on most lenses, with reasonable distance between camera and subject, the zone of focus is so broad you’d have to be trying to miss it.

As I write this I’m sitting outside in Zanzibar. It’s bright. My ISO is 200, my shutter speed is 1/60, my aperture is f/11, and my mango juice is perfect. That last part isn’t important but it’s nice. Any rangefinder lens, including some of the Fuji lenses (like the 14 and the 23/1.4 which is the classic street photographer’s focal length), have a focus distance scale on them. Right now if I focus my 21mm lens on my subject 5 feet away and look at that scale, it shows me that everything from 2.5 feet to infinity is in focus (see the illustration below). Keep my focus ring there (put a piece of gaffer tape on the bottom of the body and you’ll have a way of making sure it doesn’t move – those Fuji lenses have a tendency to drift) and I have a huge zone of focus. So large in fact that I don’t really have to focus any further. I compose and press the shutter. 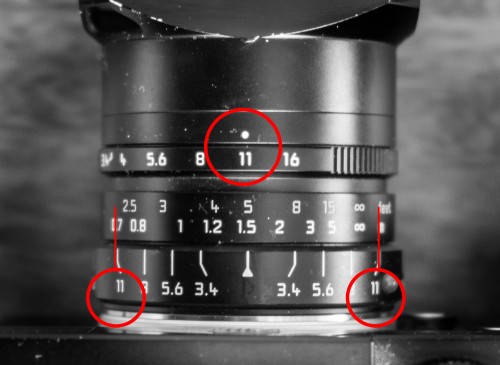 The f/stop (f/11) is circled at top. Look to the scale at the base of the lens for the corresponding f/stop. Follow the indicators to your distance scale. That is your zone of focus for that lens, at that f/stop and distance.

That, in a nutshell is zone focusing. It’s simple and photographers have used it for ages, but with modern lenses we’ve often lost these scales and have come to rely on the “what you see is what you get” of the SLR.

With this same lens at f/5.6 I could have a focus zone from 2.5 feet to just over 5 feet, or 4.5 feet to infinity (see the two illustrations below). So the closer your subject at any given aperture, the shallow that zone. 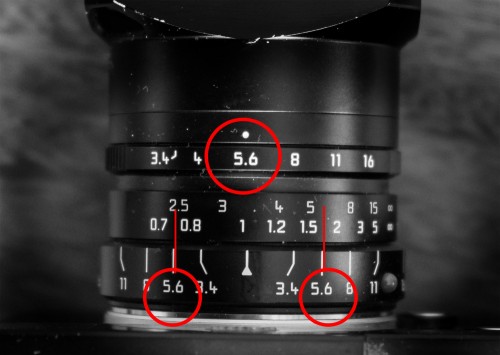 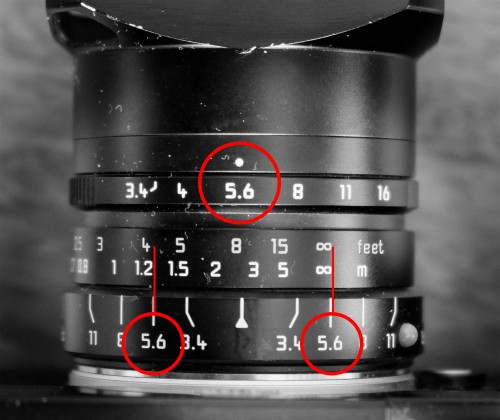 I use zone focusing in two ways – the simplest is the way I’ve just described it. Set a zone that’s as deep as I can get it, and one that includes whatever I’m likely to be photographing, say anything from 3 feet to near-infinity, and then I go. Or I’ll focus by estimating my distance to subject, knowing I have a margin of error of xx distance on either side of that subject.

Focus rings can move, so you have to watch that it is where you want it, and you have to be willing to keep your aperture where you want it – which’ll mean using shutter speed and ISO to regulate exposure but if you use your camera in manual most of the time you’ll get used to this pretty quickly. And that’s the real benefit of all this: speed. Clearly there are situations you won’t want to be, or aren’t able to be, at a tighter aperture, but when you can, zone focusing allows you to photograph very, very quickly. On the streets, or when there’s lots going on, zone focusing is hard to beat.