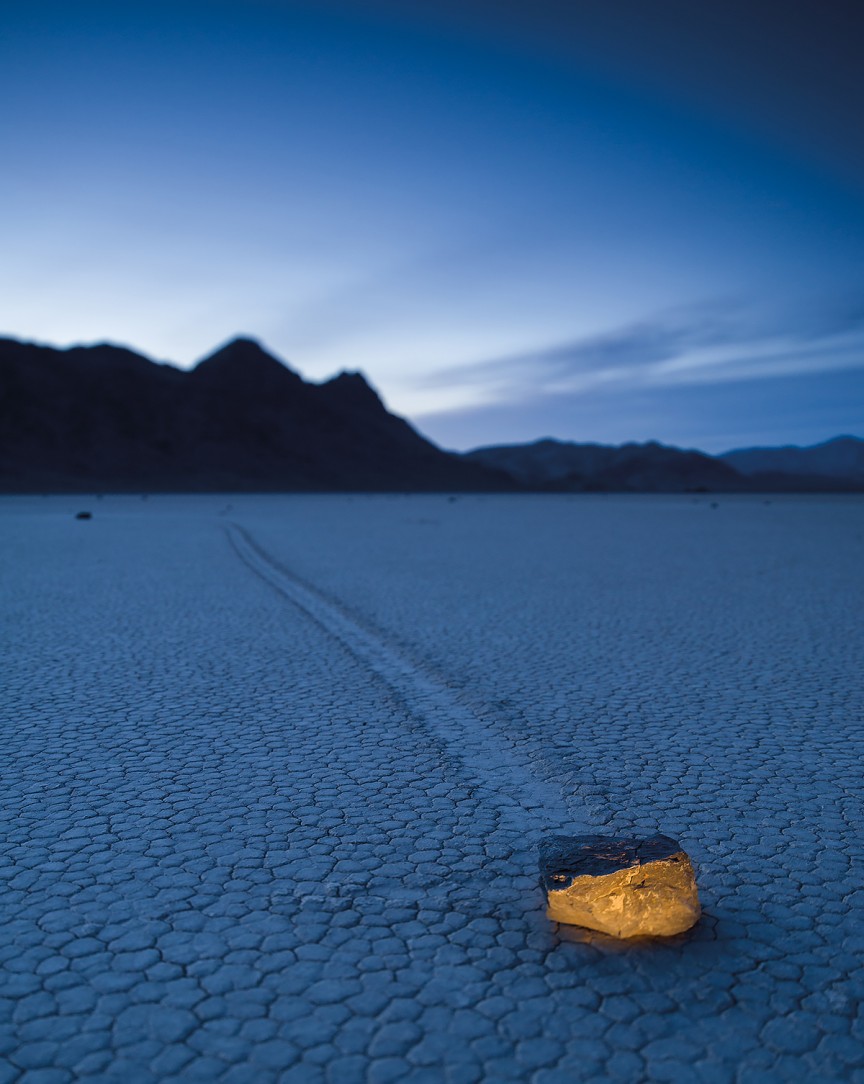 It’s not easy getting to the Racetrack Playa in California’s Death Valley. I arrived after a couple bone-jarring hours in my Land Rover Defender, just in time to do some scouting, set up camp, and grab some dinner before grabbing my tripod and heading out to wait for twilight. During the day, the playa is a rough place to be, let alone try to make photographs. The heat and reflected light make it tough to do anything but look for shelter. But as the sun falls the evening cools and you could spend hours here, which is what I did, moving my tripod back and forth, playing with angles and lenses, before finally settling on my 24mm tilt-shift, and sitting down at my tripod to wait for the light.

The rocks here move. No one seems to agree on why. But there’s a conceptual contrast here that I love; the movement of things that aren’t meant to move. While I scouted I was looking for something that had the implications of story. I wanted a great rock without much else in the background, and one with a long visible trail. As if that wasn’t enough, I wanted to westward to give myself the best shot at the fading light, which to the east was already to dark and lacking the gradient and softer tones. I finally found my rock, and the mountains in the background gave me the sense of story that I wanted, a place for the rock to come from. This is a photograph about leaving. To be fair, the playa is in a valley and mostly surrounded by mountains and rock, but when you’re trying to make that story into a photograph that also works compositionally, not all mountains are created equally.

The playa can be a solitary place, and it’s one of the things I loved most about my brief time there, so it surprised me when, after a couple hours of scouting and getting ready for the light at this exact spot, to see another photographer walking around. He walked here and there and eventually looped around and out of sight. I’d forgotten about him until I felt something on my shoulder, and turned to find his camera rested, I’m not making this up, on my shoulder. He exposed a frame, looked at the image and said, “That might be the best photograph of the day.” No kidding.

Of course there’s so much more to a photograph than being in the right place, though that helps too. Then I chose the tilt-shift lens which many landscape photographers use to maximize depth of field, to accomplish the opposite, keeping my plane of focus as shallow as I could with a wide aperture. To keep my exposure long and my aperture wide I used two neutral density filters – a graduated 3-stop neutral density and a full 3-stop ND. The longer exposure makes the blues bluer and gives moving cloud a little softness. I also pulled out my flashlight, a small halogen light over which I taped some warming gel and light-painted the rock. The final frame, though little else was done in post-production, was a composite of two nearly identical frames, one in which the rock was painted with light, the other without the added light. The camera being on a sturdy Gitzo tripod, the two frames matched up perfectly and allowed me to paint out any overspill from the flashlight. Whether my intent works for others or not, I’m often unsure, but I was trying to do a couple things with the light. The first was to give some colour contrast (yellow vs. Blue) which brings added depth to the image, separating foreground and background. The other was more related to the story, my hope being that the light would give the rock a further sense of animation. I’m aware that not everyone would opt to introduce this contrivance, but I believe art gives us all the freedom to be as literal or as symbolic and interpretive as we desire. In the end it was this more symbolic representation of the scene that captured my experience out there on that desert evening.

This article originally appeared in PhotoLife magazine, in my regular column, Without the Frame.