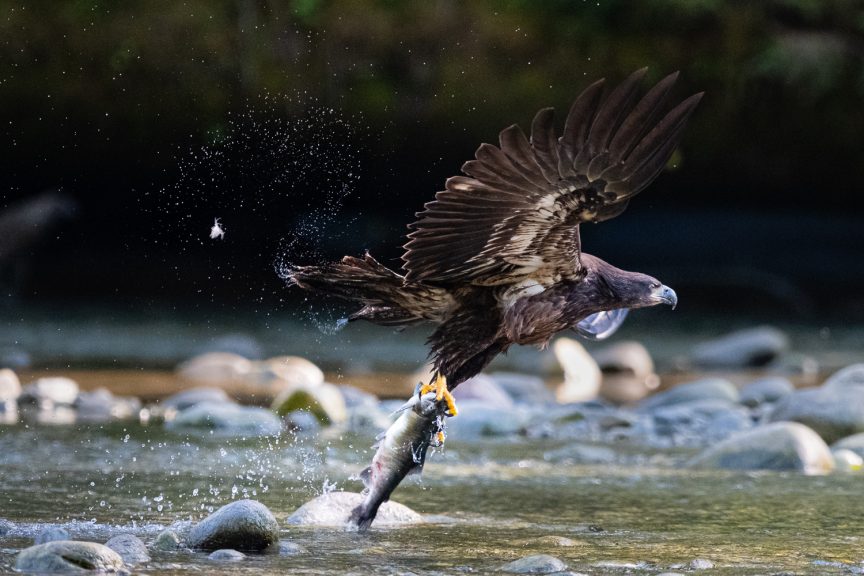 There is tremendous freedom when you finally stop worrying about meeting the expectations of others, most especially the expectation of doing things the way you should do them. For years, my Achilles heel was the expectation that I had to do certain things and use certain gear because that’s how the so-called pros did it. That’s how a “real” photographer would do it.

When I converted to digital photography, my non-negotiable was a DSLR with a full-sized sensor. It was partly because digital cameras were new, so if you wanted a 24mm lens to behave like a 24mm lens, for example, you needed a full-frame sensor, which meant going with Canon at the time. But in the years since, it has become easier and easier to get cropped sensor cameras of exceptional quality and pair them with lenses previously unavailable for those cameras.

When I recently received an email asking what gear I used and how important it was to buy full-frame cameras because I’m a so-called professional, I felt the need to discuss it. I want to give some of you the permission to stop lusting after full-frame sensors in “pro-sized” cameras or worrying you’re compromising your craft by using smaller cameras.

I use many cameras. Not everyone has that option. I have a full-frame Leica Q, full-frame Nikon D5 and D800 bodies for underwater, and I have a tiny little Sony RX 100 VII with a little bitty one-inch sensor. My main working cameras are four Fujifilm XT-2 and XT-3 bodies, all of them with cropped sensors. My lenses run the gamut from cheaper modes to the enviable pro-level stuff that cost a fortune. To look at the photographs I make, most of this would be impossible to know. No one’s looking at my images thinking what I shame it is that I used a cropped sensor.

In case you need a reminder (because I have needed them, too): the photographs are the only things that truly matter. If you love the gear, get it all. Buy what makes you happy, as long as you can afford it. But if what you want is to make photographs that you love, then here’s my advice: pick the tool that works for you. The words “for you” are the important part.

Cameras with full-sized sensors do some things really well. They are usually better at lower light and higher ISOs. Is that important to you? How important? The larger the sensor, the more it’s going to cost. Cameras with larger sensors will give you a shallower depth of field at wider apertures than cropped sensors. Is that dreamy look at f/1.2 really important to you? A full-frame sensor might be a good choice. For your work, it might be the only choice. But then again, if you’re going that route, so might a medium format camera.

Let us also not forget that a camera with a smaller sensor also does certain things really well. My Fujifilm bodies are smaller and lighter than my full-frame Nikons, which I use almost exclusively underwater, where weight isn’t an issue and low-light/high ISO performance matters more to me than elsewhere. But when I put my Fujifilm 200/2.0 lens on those Fujifilm bodies with a 1.4x teleconverter, I end up with a lens that, in terms of reach, is roughly 420mm at f/2.8 lens. That’s a really fast lens for that kind of reach, and it’s still smaller than what I’d need to buy to get that kind of performance from a DSLR (though the price isn’t much different).

On top of that, I have mobility issues now, so when I go out and photograph all day in Venice or India, a smaller, lighter camera works best for me. If a heavier camera is only going to slow me down, it’s not the best tool for the job. Only you know what your limits are.

For some of you, the economics are a more important consideration than they are for others, and you could buy two crop-sensor non-“pro” bodies for the price of one larger DSLR. Or you could put the money into going somewhere to make photographs. Or buying studio time. Or just not going into debt to buy it.

And then again, some of you do astrophotography or shoot in settings where the low-light capabilities are the single most important feature to you (and not an afterthought as they are for me), and the full-sized sensor will truly pay off. Perhaps you print much larger images than I do so all those extra pixels are necessary for your work.

You do not necessarily need a so-called pro-sized camera with a full-frame sensor just because the fancy photographers use them. You need the tool that works best for you. The one that fits in your hand just so. The one you can use all day, with features you prefer.

I am a mirrorless fan with the zeal of the converted, and I love not shooting with DSLRs now. I love the histogram right there in the viewfinder. I love the size and weight. And I love the electronic shutter that is completely silent. I don’t for a minute miss the heavy DSLR with the noisy shutter (though I do miss the extended battery life!).

You don’t necessarily need pro lenses, either, though if I were going to spend money, I’d rather spend it on lenses because they don’t obsolesce the way the camera bodies do. And though sharpness doesn’t get me aroused the way it seems to do with other photographers, I have to confess: when I look at the images I’ve shot with my Leica Q (where you’re mostly paying for the optics) or with my Fujinon 200/2.0 lens, I can tell. I can see the difference. The Leica results are that beautiful.

I also once dropped $2,000 I really didn’t need to on the beautiful Canon 85/1.2L lens. It’s a gorgeous lens that made me feel like a real pro. But you know what? It was heavy. Really heavy. And the focusing! To call it glacially slow would be an understatement. I eventually realized (admitted, even confessed, really) that as much as I loved that lens, I didn’t need it. Worse, it was not the right tool for me. I was missing shots due to the speed of focusing, and as camera sensors were getting better in low light, an 85/1.8 lens was a better option. It was lighter, much faster to focus, and it cost about $1,500 less–and that’s a plane ticket. What did I lose? A little fancy-looking bokeh and the feeling that I was a better photographer than I was because I had the “right” gear.

Better photographers (if there is such a thing—I’m uncomfortable with those words) are the ones who make better photographs, not those with better gear. The only gear that is ever objectively better is the gear that makes it possible, or easier, for you to make the best photographs. A red line on the lens doesn’t necessarily do that. But it might. Only you can determine that. Nor does a pro-sized camera. An aside: when I still used my full-frame Nikon D3s bodies for wildlife, I also had a “consumer-grade” D7200. The D7200 consistently made better photographs. The images were sharper, I preferred the colours, and I took more risks with it because it was so much cheaper. In all the ways that mattered to me, that D7200 was a better camera. Go figure.

Cameras and lenses are not “professional.” They do not “unlock your creativity.” They’re tools. And they either do what you need them to, or they don’t.

That’s why I have several. The logos that adorn them—assuming I haven’t yet filled them with black paint—don’t make a difference to the photographs. But this obsession with gear can show up in your work if you’re hoping that upgraded gear will take the place of upgraded skills or thinking. Cameras of any brand or size do not make photographs. You do. They either help or they get in the way. Only you can know which is which, but an expensive pro-sized camera or lens can get in the way as much as one designed for the average guy, which I will always be, no matter how much I spend on my kit. Don’t let the expectations of others determine for you which is which.

The best camera is not necessarily the one you have with you, though that helps, too. It’s the one that does the job you need it to do: no more, no less.

It’s Thanksgiving weekend here in Canada, and I’m celebrating in the mountains with grizzly bears, fall colours, my darling girl, and best friend. I’m so grateful for all the blessings, and count you among them. Thank you for your support and encouragement. Happy Thanksgiving, my friend.