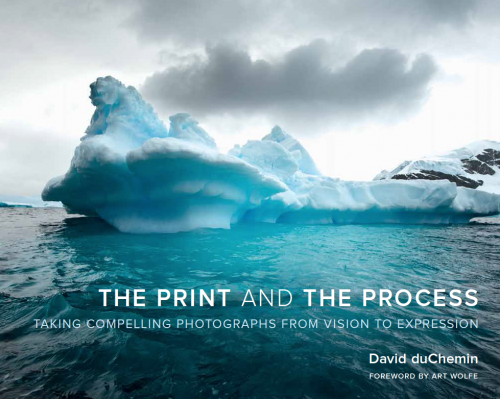 It’s here! The Print and The Process, my latest book, and the unofficial 5th book in the Vision Trilogy is shipping! It’s a little earlier than anticipated, but I’ve just had an email from home telling my the first books off the press are sitting on my desk.

I tried to do something different with this book, which we started with the Craft & Vision eBook series of the same name a couple years ago. What I wanted was a new kind of photography book, something that was strongly educational and not just photographs, but where those photographs were shown they were shown large, un-cropped, and not merely as illustrations. I wanted to honour the fact that I believe the best way to become the strongest photographer we can be is to study not just words, but photographs themselves. So there are a lot of full-page photographs.

The second thing I wanted to do, which I hope I’ve done in my other books, is build a bridge. Popular photography education is full-to-bustin’ with discussion of how we do this and how we do that. In recent years I’ve talked so much about intent that I worry the word “vision” has become completely threadbare and lost its impact. What are missing, almost entirely in popular photography’s various classrooms, are honest discussions about process , specifically the process of getting from intent to expression. And where it is discussed it’s often talked about as a simple matter, when every photographer I know really struggles with the process at times. Wrestling with the process is often messy, but the more we understand the way we make photographs, the easier it will be make those photographs.

The Print and The Process looks at four separate projects, all shot within the last few years. Two of them, Venice and Iceland, were published in a rougher form as Craft & Vision monographs, so to some of you the material will be familiar, but refined a little. The last two have never been published in any form. The first is an assignment I did in Northern Kenya, among the Rendille, Samburu, and Turkana tribes for the BOMA Project, and it’s the first time a humanitarian client has given me permission to show my work so openly. I’ll talk more about that in a moment, but for those wanting a glimpse into how I work on assignment with human subjects, this section alone will be worth getting the book. The last work is from Antarctica and if you’re a regular reader here you’ve seen a few of these images, but not the bulk of them. Here’s an advanced look at some of the spreads.

For each of the 4 projects in the book, I discuss my hopes for the work, my constraints, my gear, my thought processes, and in some cases my post-production, including a few free downloadable Lightroom 4 presets I created for my own workflow. I talk about all this in broad strokes, as well as adding comments and EXIF data for each individual image.

Is it a book about printing?
No, it’s not. It’s a book about the process that gets us to “the print” whether that’s a 16×20 fine art print or a finished image presented digitally.

But the title talks about prints!
It does. Think of it as a metaphor. There are some excellent books out there about printing. This isn’t one of them.

Is this a good book for absolute beginners?
Honestly, probably not. There are way better books out there for helping you grasp the basics of making a technically good photograph. But if you’re an enthusiastic amateur, and you’re past the very basics, and you want to begin to make stronger photographs, then you’re ready for this book.

I bought the Craft & Vision eBooks for both Venice and Iceland, should I buy this one?
If you want to see my new work from both my humanitarian work in Kenya and my Antarctica project, this is really the only way to see it, but the Venice and Iceland stuff will definitely be familiar to you. This way you get a hard copy.

I’m more of a geek than an artist, per se. Will I still get anything out of this?
As long as you’re asking me, yes. In fact, I think you’re exactly the kind of person that needs to read this and begin exploring your own process, because there’s only so far you can get with technique alone. Your work will begin to stand out and have impact when it becomes more uniquely your own. There’s plenty of geek-stuff to keep you happy. Photography is, after all, accomplished by technical means, and craft matters a great deal. I think there’s a lot to learn on both ends of the geek / artist continuum.

Do you shoot Nikon or Canon?
Yes I do. Next?

Why is this the first time we’re seeing your humanitarian work in print?
Most of my clients, in an effort to guard the dignity of the people they work with, are extremely protective about image use. I not only adhere to that, but agree with it. It’s too easy to use these photographs as trophies and misrepresent the people, and the contexts, in which I work. But BOMA Project and I click like I’ve clicked with no organization before, because it’s a small organization of amazing people, and we share a similar vision and way of working. And I not only help them tell their stories, I am a supporter and strongly invested emotionally in their work. As such we trust each other, and they see this as chance to tell their story in a new way. Additionally you’ll be supporting their work among the poorest of the poor, by buying this book. 10% of the profits go directly to women and families in one of the most inhospitable places in Africa as they struggle to become self-sufficient.

Anything else I need to know?
It’s about 230 pages, softcover, and much like my previous books except this one’s wider than it is tall, allowing the images – especially the horizontal ones- to play a little larger. Art Wolfe, a long-time hero of mine, wrote a beautiful Foreword.

Will this make my photographs better?
Honestly? No. It’s just a book. But I wrote it because I labour under the honest belief that the more we understand our process, and the better we know our craft, the closer we can come to connecting the two. Popular photographic education is obsessed with teaching us how to use our cameras, but cameras don’t make art. We do. Once we’ve learned the basics of using the camera, it’s time to move on to the harder stuff, the stuff for which there is no recipe or formula. I think looking critically at beautiful photographs, listening to other artists discuss their process, and allowing those things to inform what, why, and how we do what we do, is more important – and more difficult – than simply learning to “expose to the right”, “f/8 and be there”, or other well-meaning bits of wisdom. That’s why I wrote this. I think there are enough voices out there talking about the other stuff. If you already know how to focus an image and expose it, it’s probably time to move on.

How can I get a hold of a copy of my own?
Good question. I like the way you think. I never take it for granted that my readers are part of what I do, and make it all possible. I’m truly grateful. Thank you. If you want to get your hands on The Print and The Process, it’s available now through Amazon.com, Barnes & Noble, and pretty much any other bookmonger worth their salt. In Canada, it’ll take Amazon.ca a little longer to get them, and a little longer still in Europe. If you’re in a hurry, my publisher, Peachpit, is shipping them immediately.