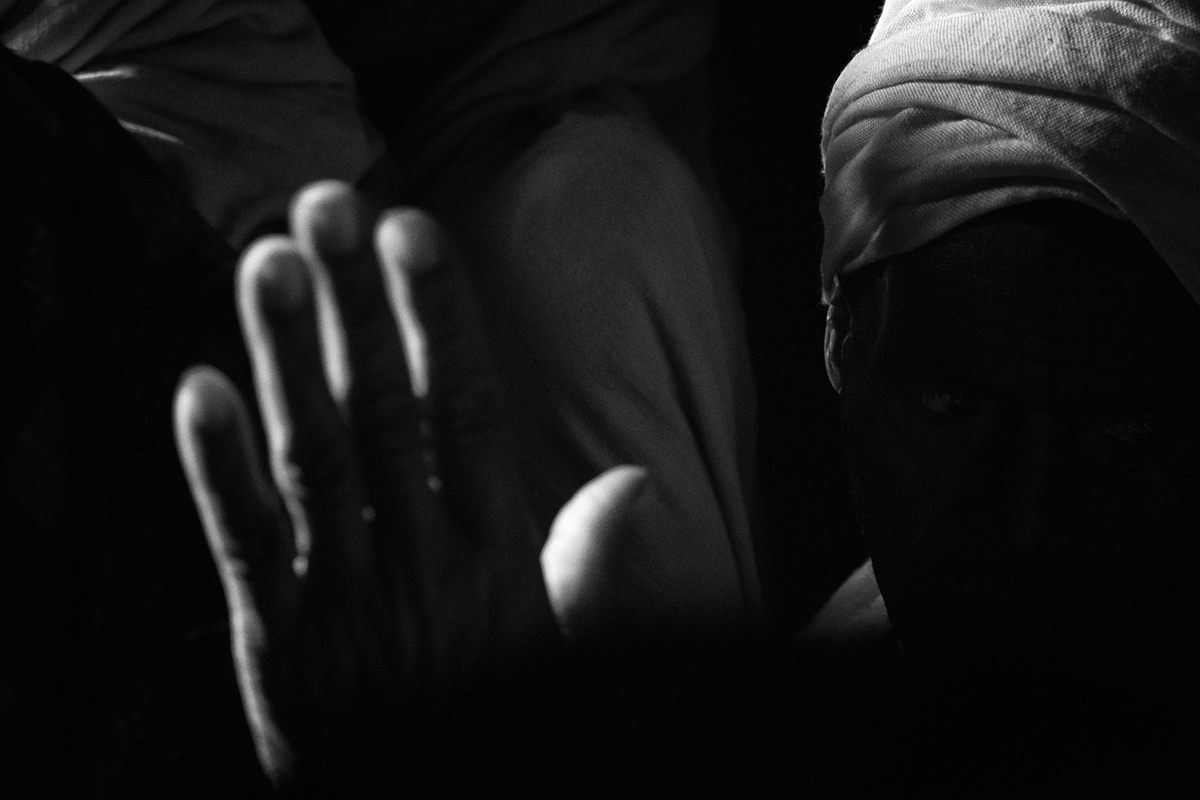 Sometimes you’re on a roll.You’re on fire.

Everything you touch turns to gold, and ideas come faster than you know what to do with them.

Other times you’ve got nothing.

Standing there in the middle of one of those places that’s so amazing you can’t make a bad photograph and feeling like an idiot because the only thing you’ve made is bad photographs, feeling empty is about the worst feeling for an otherwise creative person. I love being on fire. I don’t mind fighting through the times I’m challenged.

But empty? Shoot me now.

The creative life is a cycle of ups and downs, a rhythm of ideas and execution that has, at its low points, a trough in which there is nothing.
Zilch. Nadda. Goose egg. Big Fat Zero.

It’s here we doubt anything we ever thought we knew about ourselves, our potential, and our work both in the past and in the future. It can be a dark, frustrating place that feels like our creative deathbed. We will never make another good photograph. We will never again write anything worth reading.

We close our eyes and think really, really hard to summon the muse and are rewarded only with light-headedness and the feeling that perhaps it’s not too early for a drink. It’s 5 pm somewhere right?

Know what I mean?

I think it’s important to remind you that this is normal. More than normal, it’s necessary. It’s important that with some frequency we look in the coffers and find we’ve used up all our previous ideas and inspirations. It means we’ve been squeezing the sponge dry and holding nothing back. And it means there’s now room for new ideas.

That emptiness signals a hunger for more. It’s not the feeling of being hungry that we don’t like: it’s the fear that there’s no meal awaiting us. Creatively, it’s a signal to freak out and start posting your gear on eBay. Maybe you should learn to juggle instead. But the thing is, there’s always a meal on the other side. It’s there. We just can’t see it.

Here are five ways I use to reliably find it, or at least catch the first glimpses of it.

Who says you need a great idea to begin a great work? Begin with a lousy idea. One of the most important principles of creativity for me is Start Ugly. We all want to begin on an idea that’s halfway grown; one that already shows promise. But ideas don’t come into the world like that most of the time. Like newborns, they arrive with a wail, covered in cream cheese and jelly and wrinkly skin. Don’t wait to fill the empty with a good idea, fill it with an idea you can play with, an idea that will grow and become something.  If you wait for the good ones to arrive all grown up, you’ll wait forever.

Go exploring with your camera, with no preconceived ideas. Just play. Too often our creative efforts focus on the something that we’re making and don’t give enough room for the playfulness of process or serendipity. When you try too hard, your brain freezes up. Take some of the pressure off.

The brain is an idea factory and no factory (least of all a metaphorical one) can make anything without raw materials. If you want more ideas, then increase or improve the raw materials. What are you reading? What photographs or visual art are you studying? Are you filling your brain with the same old, same old stuff? Are you following truly interesting people on social media? Are you watching films that challenge you? Do you only read articles that reinforce what you already believe, or are you open to being challenged?

Want to stir the paint? Read a novel that’s far outside your usual preferences, or watch some documentaries about great artists, or read something instructional that’s outside your genre. If you’re a photographer, read a biography about Picasso or On Writing by Stephen King. Your output is only as good as your inputs. And if you’re dry, perhaps it’s time to dramatically increase the inputs. I average two books a week, and when I stop reading I always feel myself going dry.

Look to the Overflow

When you’re in the flow of things, perhaps in the days or weeks leading up to your current dry spell, there is often a surplus of great potential ideas. You’re always being forced to go with one or two of them, casting others off for one reason or another, most often because they aren’t a fit for this project. But that ill-fitting idea now might be a perfect fit later.

I keep a little black notebook and pen with me all the time. It holds my overflow. It takes discipline; if you haven’t been doing this, there’s no value in checking the pages of that blank notebook now, but you can begin today. The most creative and prolific people I know all keep a notebook or journal and I don’t think it’s a coincidence.

My notebook has some symbols that mark new ideas (a scribbled lightbulb) or questions (a capital Q), something I see with immediate potential or something that excites me (three exclamation points) or ideas to execute or take action on (small square/tick box). As new ideas come in, separate from my journal entries, I make these marks so I can find them again later.

In my dry times, I pull a couple notebooks from my shelf and flip through them, often coming up with several ideas I’d forgotten. These ideas become my ugly starting point and I’m off. If you keep a journal, take an hour and look back and see what kind of ideas are just sitting there. If you don’t keep a notebook of some kind, consider starting.

You know that notebook you just got? Make a list every day.

The brain is an idea muscle, and the exercise of making lists is a powerful way to force it to mine for new ideas. Remember, they don’t have to be good ideas. Just ideas. Make a list of ten things you could photograph today, or ten creative things to do with your next portrait session, or ten articles you could write, or 20 ways you could make $100. To begin, maybe you should make a list of 50 lists you could make.

The first few ideas will flow. They’re the obvious ones. The next will be harder. The last few will be torture. Your brain will be screaming, “This is stupid; these ideas are stupid!” Ignore your brain. You’re empty, remember? If your brain had anything better to offer, it would have spoken up by now. Your brain had its chance. It’s way easier to criticize a bad idea than to shut up and finish the list.

Remember this: ideas are always combinations of other ideas. The more you can come up with—the more you can exercise your brain—the stronger it will get and the more able it will be to drown out the censoring voice. My last list was about new ways I could make more money. I’m not ashamed to tell you it included some absurd things. Toward the end of the list I wrote something about selling drugs to school kids, and harvesting my own organs to sell on eBay. Am I ever, ever, going to act on either of those? Of course not. But the exercise helps me think more obliquely, ruling nothing out. You can sift out the real stinkers later, but if they shake you up and get you to the good stuff, they’ve served their purpose.

When you go to the gym and get on the rowing machine is it because you want to get really well-practiced at rowing? For most of us, the rowing is not the point; it’s the exercising of the muscles we use for other things. Making lists is a way to train our ideation muscles.

Identify a project or idea that you do love, something you’ve seen someone else do. Make that your starting point. Don’t try to replicate that work, just use it as a starting point.

There’s no shame in finding something you love and beginning there. Make a list of ten photographers you love and find one of their ideas and begin there. If you’re an author, begin with the broad premise of the last book you read (a clown terrorizes a midwestern town) and take it wherever you like. Maybe the clown becomes a magician and the midwestern town becomes the Vatican. I don’t know where it will lead, but I know if you don’t begin somewhere and aren’t willing to start ugly when you do, you won’t get anywhere.

What you must not do is take it personally. Every creative person ever has wrung the sponge dry once in a while. So you’re dry. Big deal. Have you written something good in the past? You’ll do it again. Have you made some photographs previously? You’ll make them again.

The ideas that led to those projects in the past weren’t pulled from a limited and dwindling supply, handed out by the capricious muse like some demented Santa Claus based on how good you’ve been. They come from your astonishing brain, an idea factory you can control, whip into shape, and whose output you have much to contribute to. Keep the raw materials coming in, expose yourself to good art, read some books, make some lists.

One More Thing
You are in process; it’s important you remember that. One of the next resources I’m creating is a much larger undertaking than I’ve done before and after wracking my brain over a name and enlisting many of you to help, the name that best reflects what that resource is all about is Making The Image. The only problem is this: I already have an eBook and companion video called Making The Image.

So on Saturday morning, November 03, I’m taking the existing resource off the Craft & Vision shelves forever. It’s still a great resource, but in the interest of clarity and not confusing things, and because I really, really want to use that name for the new project, it’s getting recycled.

If you’re interested in the questions that go through my mind when I make photographs and want to dig into the process of making photographs, this will be the last time you can get it in this form from me. Making the Image addresses why we choose the settings and the compositions we do, the perspectives and the lenses, and all the other choices that determine those choices matter. Process matters.

The new resource, the NEW Making The Image, will be launched in April and I’m already hard at work at, but it’ll be a completely different thing, so don’t hesitate to get this one before it’s gone. I know many of you have it already, I just wanted to give a chance to those of you that don’t and might find it useful.

This is your last chance to buy Making The Image. It’s $25 and now only available until the end of November 02. Click here to see more or to purchase.