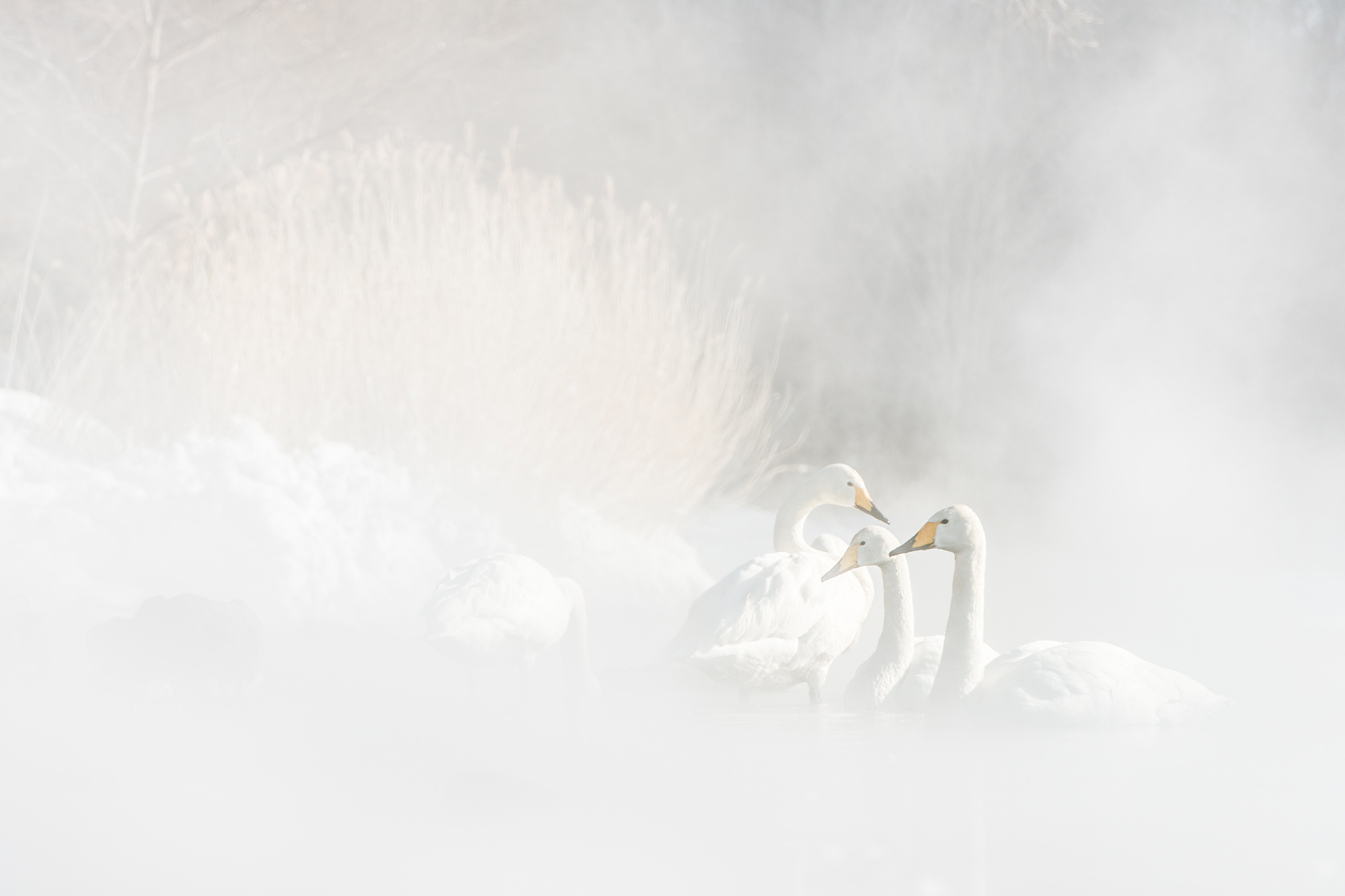 Painter Robert Henri said, “Paint the flying spirit of the bird, rather than its feathers.” Similarly, Poet Anton Chekhov said, “Don’t tell me the moon is shining; show me the glint of light on broken glass.” One is a plea to painters, another to writers, but both beg the same thing: make me feel something. Don’t just tell me; don’t just show me. Make me feel it.

But how? The short (and only partial) answer is composition, the way we place elements in the frame relative to each other and to the frame itself, as well as the choice to include (or exclude) those elements.

How we choose to compose can determine how well we tell the story we want to tell or how the image feels. It can give the image tremendous energy or rob the image of the same. It can bring balance or tension to an image, or it can make the same image feel imbalanced. Used well, it can help you make the photograph express what you want it to express. Used poorly (or not considered at all), the photograph can simply fall apart. Composition is tremendously important.

And yet (there’s always a “yet,” with me, isn’t there?), it would be a mistake to lean on composition alone, or more specifically, our knowledge of the principles of composition, to do the heavy lifting.

You can put the main subject on the leftmost third of the image and still have an image without heart. You can watch the edges of your frame and make sure your portrait subject is looking into (and not out of) the frame as you’ve been told to do. You can keep your horizons straight and get high marks at the camera club and still not have an image that feels the way you hoped it would. Why is that?

Because composition and all the principles that we need to understand to make our photographs do the million things we might ask them to do, these are only tools. It’s how we use them that matters.

In the past, I have likened these tools to the elements of language. If you want to speak a language, it would be foolish not to understand all the possibilities of how that language works. Photographically, composition is about how images work. When we ask ourselves where we might place the subject in our frame, the question is about composition, but what we’re really asking is, “What will work best here, given what I’m trying to accomplish?” It’s like deciding to use one word in a particular sequence in a sentence: put it in one place, or use a different word or sequence entirely, and the meaning of it and how others experienced it will change.

But there’s something else—and it was only this morning while typing out a reply to a frustrated student who says she’s been making photographs for a long time and wonders if she should just give up because her photographs don’t feel the way she wants them to—that I found a different way to think about this. I’m hoping that if I express it well, it’ll help you, too.

“Consulting the rules of composition before taking a photograph is like consulting the laws of gravity before going for a walk.”
~Edward Weston

“Those Dutchmen had hardly any imagination or fantasy, but their good taste and their scientific knowledge of composition were enormous.”
~ Vincent van Gogh

In their respective ways, each quote points to the importance of composition. They aren’t downplaying our understanding and use of the principles that make images stronger; they are asking for us to use them in service of something more. Both quotes point to the need for creativity, imagination, vision. I imagine (because I’ve read other quotes from both Weston and van Gogh and have a sense of what they were trying to achieve in their own work—that they are begging us for a little more heart, more risk, more play. To return to the metaphor of language, perhaps they would ask us to consider our compositions in service of a little more poetry.

This is what I told my frustrated friend:

When we learn a language, we learn a lot of things: new words and new ways of stringing them together so they make sense and are understood and accurate. We learn what works and what doesn’t. And in very real ways, we learn a different way of thinking. This takes a long time in any language, including the visual language of the photograph.

But learning to speak or write English or any other language is not the same thing as learning to write poetry in that same language. They are very different, and not to be confused. She who spends 15 years learning English should not be discouraged when her first efforts at a poem fall frustratingly short; she simply hasn’t learned to write poetry. It’s a whole different thing.

You don’t “consult the rules of composition” before writing a poem. But you do understand them. You know what works. And then you play with them: you dance with them. And learning the dance of poetry is another learning curve entirely. But it’s not a learning curve you can take on without first having a sense of what works—of what the possibilities can be. The poet needs more words, not fewer. She needs a greater understanding of which words sound well together, and which have different meanings. The poet needs to understand how we experience rhythm or symbolism. You could take English language courses for a lifetime and never have a conversation about that.

You could also take photography courses for 15 years and never have a conversation about the human experience of the photograph or, to channel Robert Henri, how to express the spirit of the bird in flight rather than showing its feathers.

What we do with our understanding of composition (and compositional devices like scale, contrast, balance, tension, depth, colour, repeated elements) gives us a greater possibility to make photographs that elevate the human experience of the photograph. Photographs with mood and mystery, photographs with rhythm and symbolism. It is how we use these devices (like a slow shutter to depict motion, among others) that makes us feel. It is in these, and the dance of putting them together in new ways, that the photograph becomes a visual poem and judged by very different (and much more human) criteria than what the camera club so often asks of us: images made by photographers, as van Gogh might have said, that have “good taste” and enormous “knowledge of composition” but “hardly any imagination or fantasy.” The former can be learned quickly; the latter can take a lifetime.

The work of poetry is not merely in letters and words, though the poet can’t do without them. It’s in using those tools to create an emotional response in us—tools I’ve already mentioned like rhythm and symbol. Choosing words with certain sounds. Taking risks with spelling and pushing grammar and punctuation in new directions. It’s being willing to create mystery rather than perfect clarity, resonance rather than precision. The same is true of the photographer who wants to say more with his photograph: “look, the moon is shining” but wants to make me feel the glint of the moonlight on shards of glass.

It’s not about knowing composition, but it is about using it. Every poet in the English-speaking world has access to the same 26 characters, the same verbs and nouns, the same adjectives and adverbs. And every poet finds very different ways of using them, bending and twisting their use of them, some to the point of breaking all previous conventions. But they will all be different. The poems of Gerard Manley Hopkins (one of my favourites) will be different from the poems of Emily Dickinson. Or John Donne. Or e.e. cummings. They will make us feel different ways, paint different pictures in our imaginations, not because they know or consider the principles of composition (which they most certainly do), but because they wield them with such mastery and imagination, and they hope we will do more than just read the words on the page—that we feel them.

Never stop learning what makes the photograph work. Never stop studying the masters in search of what worked for them. Find photographs that make you feel something and figure out why you feel that way. It’s all there in the image to be learned. Never stop exploring new ways to use scale, tension, juxtaposition, or negative space, and all the other tools there to be played with. Add all the new vocabulary you can add to your language skills. But don’t get discouraged if these alone do not make you a better poet. For that, you need to think more about the experience of these things and ask yourself what they conjure in the human heart and mind. You need imagination. You need creativity. This is the dance of craft and vision.

This is the first article in this series; it’s just too big to cover in one post. In two weeks or so, I’ll post part two, and we’ll take a look at a couple of ways these compositional tools can be used to create images that create don’t just show us how things look but how they feel. Want to ask a question or leave a comment before then? The comment section below is there for exactly that