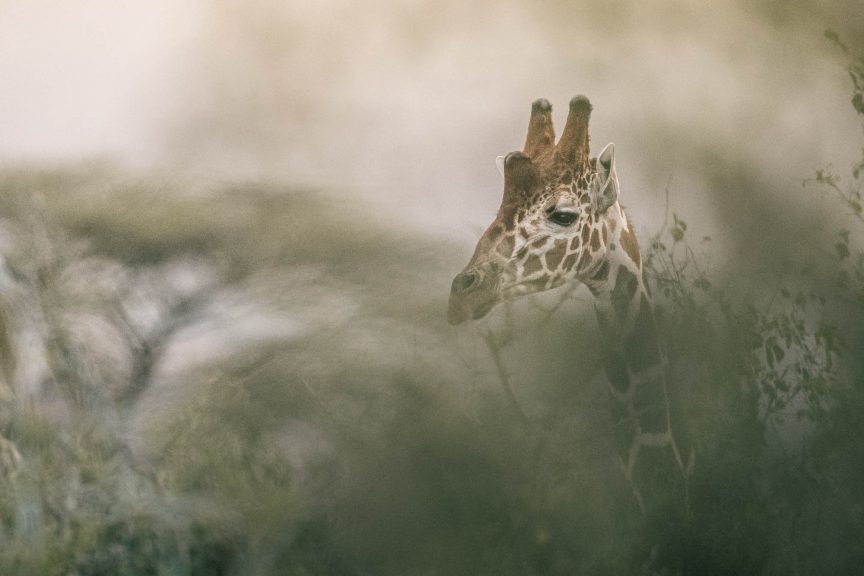 I traveled once with a photographer who would leap into a scene, press the shutter, and more often than not exclaim, “I got the shot!”

Depending on whether you were there at the time or only heard of it after the fact, it was either really annoying or mildly amusing. If the direction into which he leapt to “get the shot” happened to be in front of your camera, it was hard not to want to bludgeon him with the nearest tripod.

“I got the shot!” he would confidently claim. And that was that. Time to move on. Nothing more to see here. The target had been acquired.

I used to make fun of this until I found myself thinking in a similar way recently. I was on safari in gorgeous light, the sun was a hot ball of fire on its way below the horizon, and everything in the foreground begged to be underexposed and turned into a silhouette. It was beautiful, but not the first time I’ve photographed that kind of scene. I’ve shot it so often now that it’s been reduced to a formula to make the teaching easier: use your longest focal length, tighten your aperture (F/18 or 22 is good), and underexpose by 3-5 stops, depending on where you’re metering from. The sun ball gets well defined, gets larger as your focal length increases, and underexposing turns the giraffe/antelope/zebra/whatever in the foreground into a silhouette while also making the sky super colourful.

“I’ve got that shot” was what I was thinking on a recent game drive, giving myself an excuse not to pick up my camera and make the effort. And I was wrong. I didn’t have that photograph. Not that moment, not those exact elements, and not the chance to do this one differently. For a guy who writes about creativity, this was not me at my most creative.

“I got the shot”—or the various versions of it—is lazy thinking.

And it’s wrong-headed. There is no “the shot.” There are only infinite variations on a theme and opportunities to do it differently. Sure, you’ve already made a photograph in similar circumstances, but your choice of lens and perspective, what you include or exclude, the moment you choose, the exposure value you decide upon, etc., are what make the photograph.

The ways in which we make something new or different from familiar scenarios are almost infinite. Or they can be.

I found myself thinking this way more than once in Kenya last month. As I built the body of work I was creating, I kept hearing, “But I’ve got that shot” in my head. Lions playing. A mother cheetah and cubs. Animals against the rising or setting sun. And each time, I had to fight back. “Not this one, not this time,” I would remind myself. You never know what’s coming. You never know when the familiar will zag into the previously un-seen, when the cheetahs will do something unexpected, or when your thinking finally changes about that sunset shot and you try something different or see something new.

When I look at my bodies of work over the years—the series of images I’ve made—I’m always struck how later efforts at one kind of photograph are stronger and more refined versions of earlier efforts. My editing process over days or weeks often finds me excluding from my collection an image I thought was amazing, only to realize I could do better. And I wonder how often “I got the shot!” or “I’ve already got that shot,” might have stopped me from making the effort to do better. To take more risks. To be a little more creative and take a chance at something better and different.

You might already have a shot. It might be the strongest photograph you’ve made so far. But don’t let that get in the way of attempting to do it differently, or to make it stronger, to be more creative with the combinations of settings, composition, light, elements of story, or any of the other decisions we make with the camera, in the edit, or while developing an image.

Whether the next one is stronger or different is up to you. But if “I’ve (already) got that shot” prevents you from putting the camera to your eye and being more creative, then you’re probably right: you have the shot. But it’s not going to get any better.

Most of us photograph similar things many, many times as we grow in our craft. Writers are like this, too: their later stories or novels often contain the seeds they planted in their earlier work. But they’re stronger now. More nuanced in the more mature work. Less simplistic, perhaps. I suspect many artists are like this, working with familiar themes and materials, never seduced by the idea that they’ve done their past work so well that it can never be refined, reattempted, or remixed in the future, especially as they grow in their craft, vision, or both.

Creatively speaking, there is immense freedom in this. It frees us from repeating ourselves but also gives us permission to keep trying with the subjects, themes, and techniques that most fascinate us. It also frees us from trophy hunting, as though we’re all just working with a checklist or the pressure to compare our work with what’s already out there.

Most of us don’t want “the shot” as much as we want the next shot, a stronger shot, or a shot that is uniquely our own.

I don’t like the words “shoot” or “shot.” I’ve used them here, and they slip into my vocabulary now and then because they are part of the language of popular photography. But I fight against it, and one reason is this: photography is not about hitting a target. Not for me, and I suspect not for you. It’s about exploration and expression. My subjects are not bullseyes at which I aim, and which I either hit or miss.

Choice of words aside, I think our strongest work can only be identified in hindsight. It’s the work that endures and continues to thrill us in the long term. And it’s often the work that we got to the long way, led there by our earlier efforts. I find the idea that we “got the shot” a little too presumptuous and self-congratulatory to lead us any further.

For example, I made a landscape image in Kenya that I liked (below), and there it was: “I’ve got the shot.” But I kept thinking I could do better; there was more possibility in that scene than I had explored. I went back the next morning and made another photograph that I was much happier with because the results were totally different. But I was sure there was more there—no mere “one shot” to be harvested. So I went back the next morning at the same time and made something completely different.

Don’t let the idea that you’ve got the shot stand in the way of trying again, exploring different approaches, going back for different light or stronger moments. If the magic was there once, it might be there again—and better than you imagined.