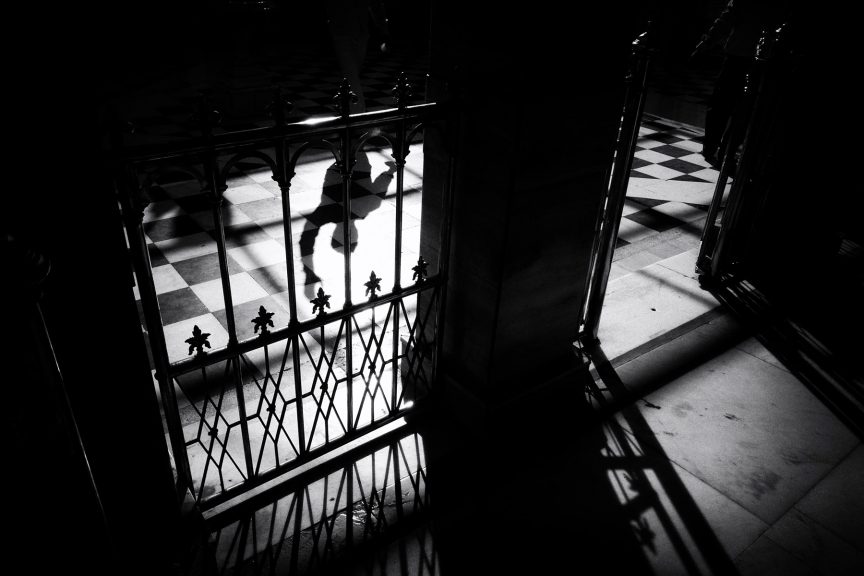 I’ve been hosting Heart of the Photograph virtual lectures for camera clubs around the world over the last couple of months, and one of the questions I seem to get after every one of those lectures is this:

How do you approach your black and white work?

The question comes in many forms, and now seemed as good a time as any to revisit the subject.

I’ve been a fan of black and white or monochrome photographs since I first discovered Ansel Adams and Canadian portrait photographer Yousuf Karsh when I was 15 years old. They (among others, like Henri Cartier-Bresson) made me fall in love with inky blacks and elegant greys, and the power of careful composition and attention to the quality of a moment. For me, there are visual qualities in a monochrome image that often wouldn’t play with the same kind of strength in colour. There’s also a nostalgic quality to black and white that I find hard to shake off.

The reasons for making monochrome images are as varied as the reasons for making the choices we do about colour photographs, and I’ve previously discussed them in “Why Go Monochrome?”, so I won’t cover that ground again. That article covers the why, and this one covers some of the how. It’s more of an introduction than a masterclass, but there are some initial ideas that might be of interest to those of you just starting to play with black and white.

If colour doesn’t add something important to the experience of the photograph or if it’s not an important part of what the photograph is about, then I’m more likely to remove it than to leave it in. This allows other elements, like lines and contrasts, story, or gesture, to play more powerfully without competing with the colour.

I photograph a lot in series—larger bodies of work I know I want to be in black and white. Without colour, groups of images are easier to harmonize or bring into a more visually cohesive set. And in photographing a series, no advance in the technology of our gear has been more helpful than the ability the electronic viewfinder of mirrorless cameras has given us to see and photograph in monochrome.

Set Your Camera to See in Mono

Seeing in black and white is a learned skill, one that I still don’t really have after 35 years with a camera. I can guess what the scene will look like (but it’s not much more than that), so the ability to look through the viewfinder or into my LCD screen and see the scene in black and white is powerful. I don’t know of a mirrorless camera that can’t do this for you.

If I know I want to shoot in black and white, I set my camera to show me the world this way. If you use a DLSR, you can probably do this in LiveView mode, but mostly you’ll have to rely on your powers of visualization and the flexibility that shooting in RAW and using the digital darkroom can give you to make the most of your efforts.

So how do you set your camera to show you the world in black and white?

Every camera maker does this a little differently, but it’s nothing you can’t find by searching Google for “shooting in monochrome on [INSERT NAME AND MODEL OF CAMERA].”

For those of you using Fuji systems, here’s how I set my XT-2 and XT-3 bodies:

Then you can choose one of the following options: Acros (a simulation of the Fujifilm black and white negative film of the same name) or Monochrome.

Within those two options, you can also choose:

These change the contrast and tonal values in the image. A red filter, for example, lets more red light through but less blue or cyan, which is why it’ll make blue skies look much darker. What’s wonderful about these filters within the camera is that you can see the effect they have immediately: just scroll through, see what they do, and choose the one you prefer. I don’t personally use them, mostly because I shoot in RAW and prefer to do that kind of fine-tuning in Lightroom. In other words, I like the camera to show me the world in mono, but I’ll use the darkroom to make the photograph look the specific way I want it to.

For now, pick up your camera and figure out how to preview your scene in black and white. With my Leica Q (also mirrorless), I go to:

There are fewer options on the Leica, but a separate Contrast setting (Menu > JPG settings > Contrast) lets me choose between Low, Medium Low, Standard, Medium High, and High. Of those options, I prefer Medium High. Most digital cameras will allow you to make a similar change in contrast. If you were shooting only in JPG, these contrast settings (and the choice of filters above for the Fuji) would be of greater importance.

Always Shoot JPG + RAW (Or at least in RAW)

While you’re digging around in the menu, you probably want to consider setting your camera to shoot RAW + JPG. On the Fuji XT-3 that’s done here:

Now FINE + RAW is not your only option; if you don’t want the very highest quality JPG as well as a RAW file, you might want to choose NORMAL + RAW, as it’ll save you some room on the memory card. I don’t worry about space; I have plenty of cards. What’s most important to me is being sure I have a JPG anda RAW file.

Actually, that’s not completely true. What’s most important to me is that I have a RAW file. I like to have the JPGs, but only so I can quickly shuttle them to my iPhone or iPad to review on the field or quickly send them as an attachment to an email.  It’s possible to set the camera to view the world in black and white and still only create a RAW file, which, as you probably know, is always a colour image (which is a very good thing).

Why RAW? Because when you open the image in Lightroom or your digital darkroom of choice (which I’ll discuss in a moment), you want that colour information and all the flexibility that gives you for the best black and white image, as well as the freedom to change your mind, should you decide later that the photograph just works better in colour.

When I’m photographing what I intend to be a monochrome series or single image, I’m looking for scenes in which there are strong blacks and bright, clean whites. Lower contrast scenes rarely work as well for me. But remember, tonal contrast is not the only kind of contrast, and when colours are removed from the scene, other elements (including interesting contrasts, like contrast of size or between stationary and non-moving elements, as discussed in this article) are given a chance to play much stronger. I’m always looking for contrasts, but with black and white, even more so.

Get Comfortable In The Darkroom

Contrast—and the ability to control it—is also important in the digital darkroom and is why I shoot in RAW. If I shoot only in some monochrome JPG format, I end up with only tones of black, white, and all the greys in between: my ability to move those around is limited.

But if I start with a colour image, I can turn any hue in that image into almost any monochrome tone of my choosing, and that gives me incredible flexibility and control. Blue skies can be lightened or darkened as I like. Red elements can be made lighter (as one example), while green elements can be made much darker, increasing the contrast in ways I couldn’t do with an image that’s missing the colour information. A RAW file gives me the most control over contrasts as well as the best image quality.

For example, if I photograph a scene in which a blue house is beside a yellow house and a man in a red coat walks through the middle of the scene, the contrast is the colour photograph is clear because of the colour: you can see the difference between red, blue, and yellow. But make that a monochrome image, and much (if not all) of the contrast disappears—it becomes a man in a grey coat walking by a couple of grey buildings. If I have only a black and white JPG file, my options to increase the contrast are limited. But if I have a RAW file with colour information, I can make the blue areas very dark, the yellow areas much lighter, and play with the red areas so they stand out or blend in, depending on what I want.

Contrasts can also be increased or decreased with the use of dodging and burning (the selective lightening and darkening of areas in an image), and doing this with a RAW file will give you the most flexibility and quality.

I don’t dodge and burn nearly as much with colour images as I do black and white, mostly because colour images start to look suspicious much faster when tinkered with, but also because mono images will allow much more tinkering before they begin to look strange or unbelievable.

Finally, for the curious,  while I love Adobe Lightroom, I still prefer to use Nik Collection’s excellent Silver Efex Pro, which remains my preferred means of converting my colour RAW files into a final monochrome image. If you love monochrome, Silver Efex is worth looking into.

There is much to know about the possibilities of converting colour images to stunning black and white, and I discussed many of these ideas and techniques in five of the lessons in my ImageWork course; those of you who enrolled might want to go back and watch those episodes again. There are so many amazing possibilities, and once you grasp the basics, you’ll have so much more control and creativity with your monochrome images.

If you missed the ImageWork course last September and are wishing you had signed up, please consider putting your name on the waitlist. I will be opening it briefly for a small group of my new subscribers in April. Most of you won’t receive those particular emails because I don’t want to overwhelm your inbox, but if you want another chance to enroll, you can get more information and put your name on the waitlist at ImageWorkCourse.com. I’ll let you know when the course opens in April.

I hope this helps. I’d love to answer any questions about the thinking, the settings, or the process. If you can’t figure out how to set your camera to Monochrome, let me know which camera you have in the comments and I’ll do my best to help you get it sorted.